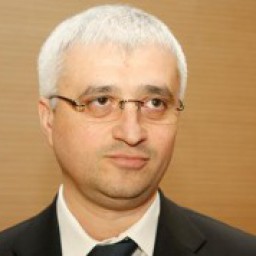 He defended his thesis for the degree of candidate of sociological sciences.

Acting State Advisor of the Russian Federation of 2 class.

He began his career in 2000 in the position of a bailiff - Executive Marshals Service of the Ministry of Justice, Republic of North Ossetia-Alania.

From 2000 to 2004 he worked as a qualified expert, chief adviser, the chief federal inspector in the Republic of North Ossetia-Alania Office of the Plenipotentiary Representative of RF President in the Southern Federal District of the Russian Presidential Administration (Rostov-on-Don).

From 2004 to 2006 he served as Deputy Director of the Scientific Center of Legal Information of the Ministry of Justice of the Russian Federation (Moscow).

In 2006 - Deputy Head of the Ministry of Justice of the Russian Federation in the Southern Federal District (Rostov-on-Don).

In 2007 - Deputy Head of the Russian Federal Registration Service of the Ministry of Justice (Moscow).

In 2009 - First Deputy Director of the Finance Department of the Kostroma region (Kostroma).

From December 2009 to November 2012 he worked as Deputy Head of the Secretariat of the First Deputy Chairman of the RF Government II Shuvalov (Moscow).

October 15, 2014 received the mandate of the Russian State Duma deputy from the faction "United Russia". He is a member of the State Duma Committee on Industry.

In North Ossetia, the Russian Popular Front members addressed to Vladimir Putin, complaining about the falsification of the primaries.

Authorized Regional Coordinating Council of ONF of North Ossetia write a collective appeal to the chairman of the party "United Russia", leader of the Popular Front, Vladimir Putin.

"The situation around the popular vote (the primaries) made us to address you. Doubts have risen about voting results at us. In particular, the puzzling was caused by the presence among the clear leaders of Makiev Zurab Gayozovich, little known candidate in the country. Our doubts have been completely confirmed, after summing primaries on one of the sites, where we voted. Suddenly it discovered that, as well as throughout the country, we also "voted" for Makiev", - wrote the authors of the petition, the text of which presents IA "OSinform".

"As we all know each other, we decided to ask each other who of us voted how, and it was found that none of us gave a voice for Makiev candidate. We believe that the basic principles of voting are violated, which you, dear Vladimir Vladimirovich, were saying about: transparency, integrity and objectivity. We affirm that our opinion on the candidates is grossly distorted, "- say the authorized regional coordinating council of the All-Russian People's front for the North Ossetia-Alania.

The appeal was signed by the 170 authorized of RCS ONF of North Ossetia, told in the press service of the Russian State Duma deputy A. Fadzaev.

In 2011, his son, Zurab Makiev, decided to be elected to the State Duma. The "Caucasian road master" relative candidacy had a great success in the relevant authorities, but the residents refused to support it, calling Makieva Jr. "little known in the country" candidate. Failure did not stop a caring parent - State Duma deputy Maharbek Khadartsev suddenly loses his mandate and vacated seat in the building on Okhotny finally goes to Makiev. There is one oddity in this substitution: as it is surprising, but Khadartsev from the deputies of the Russian parliament became only a member of the Assembly of the representatives of the city of Vladikavkaz. I do not want to think that the deputy's mandate has been the subject of commodity-money relations, but we cannot but admit that this version explains what happened better than any other.

February 19 died while being treated at Moscow, the head of North Ossetia Tamerlan Aguzarov, elected to the post in the last year...

Some experts believe that the new applicant can be a native of the Parliament, emphasizing the 39-year-old member of the Committee on Industry Zurab Makiev, representing the ruling party "United Russia".

So, the head of Regional Studies Center for Political Technologies, Rostislav Turovsky believes that a possible candidate for the post of head of the North Ossetia can become a head of Vladikavkaz Maharbek Khadartsev or a member of the State Duma Committee on Industry Zurab Makiev.

- It's hard to name the most likely candidates for the post of President of the Republic of North Ossetia, as the death of the former head came as a surprise to many. However, the criteria by which candidates will be selected can be assumed now. The first is the relationship with the federal government, and secondly, he must necessarily be an Ossetian and a native of the country, - said Rostislav Turovsky.

The candidacy of Zurab Makiev was named the most probable, as he has a direct connection with the federal government and at one time worked under the leadership of Deputy Prime Minister Igor Shuvalov.

Russian State Duma deputy Zurab Makiev allocated funds that will allow the football club "Alania" to conduct the next game. It became known from the words of the general director of the club Robert Dambegov.

According to informed source of the "Criminal Russia," a deputy of the State Duma of the Russian Federation Zurab Makiev, which, apparently, believes that the coveted position may be bought, shows special interest in the "elimination" of Bitarov in view of its prospects.

From sources we learned that Makiev managed to enlist the support of one of the main Russian United Russians, having presented him a gift of a gun made of pure gold. To send a veiled bribe, Makiev and his equally enterprising father, which we will discuss later, played the whole performance. So, Makiev ordered the golden gun in their native Georgia, and were able to negotiate with the head of South Ossetia that precious gift will be awarded to the vice-speaker of the State Duma, the Secretary of the General Council of "United Russia" Sergei Neverov that is what happened. In what format the conditions of the deal were discussed, is unknown, but Neverov was clearly whispered in your ear, saying, say a word for...

The plan of the golden gun worked, and soon Tajmazov Arthur Boorisovich - the world famous Russian and Uzbek wrestler- was expelled from the list of candidates for the election of deputies of the State Duma of the VII convocation in September 2016. A native of North Ossetia and one of the most titled athletes in the history of wrestling, of course, enjoys a wide popular support at home and makes competitors pretty nervous. One of them - Zurab Makiev to eliminate popular rival, which has a much more powerful authority, and hence - a great chance of winning, resorted to not quite fair and noble tactics. The fact is that after the presentation of a corporate gift in the North Ossetian branch of "United Russia" there was a call from Moscow. At the opposite end Sergei Neverov strongly asked to make a small castling - to replace Taymazov on Makiev, which, by the word, didn't pass in the list of candidates to the State Duma. So Makiev once deprived Ossetian public opportunities to honest will and voting for a truly distinguished man in the country.

... Ups of Zurab are increasingly associated with high lobbying potential of his father Gaioz Makiev, head of the Federal Road Directorate for the North Caucasus, now the head of the Stavropol branch of the FAA "Glavgosexpertiza of Russia." According to the source "Criminal Russia", the creation of this self-regulatory structure occurred with the direct participation and approval of the head of the "RTN" Alexey Aleshin - a friend of Gaioz Makiev.

Zurab Makiev appeared in the Duma in a result of a multi-pass combination. In 2011, he took third place in North Ossetia in the primaries of All-Russia People's Front, which was a complete surprise, because he was not too well known in the country (at the time Makiev worked as deputy head of the secretariat of the first vice-Prime Minister Igor Shuvalov). The key of a successful political debut of Zurab Makiev was called his good connections in Moscow (almost all of his administrative career has been linked to the federal government), as well as the presence of a powerful father - Gaioz Makiev, the head of the Federal Road Directorate for the North Caucasus.

Makiev entering in the checkpoint part of the list of "United Russia" helped the then head of North Ossetia Taimuraz Mamsurov to solve an important strategic task - to prevent the re-election of the current State Duma deputy Arsen Fadzaev, which was perceived as a real contender for the post of head of the republic...

A good opportunity to show a principled own position on important for North Ossetia precedent was presented for him a few weeks ago, when the bodies of internal affairs held searches on Vladikavkaz high-tech enterprise "Baspik". Zurab Makiev immediately gave a support to it and announced an intention to submit a request to the General Prosecutor's Office on the fact of the legality of investigative actions.