As it became known to Rucriminal.info, the structures of Marina Sechina (the ex-wife of the head of Rosneft Igor Sechin) plan to put up for sale for $ 15 million the building at 22 Raushskaya embankment, building 2. Most of the structures officially controlled by Sechina are officially registered in this building. including Mosuralbank, Roskommunenergo, Energopromfinance, etc. 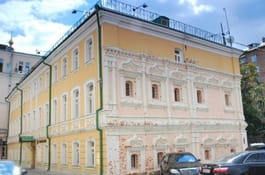 This building has a very interesting fate. Initially, his businessman was Andrei Burlakov. He was a major shareholder of the Cypriot offshore "Lanarico Consulting Limited", which owned the building. Also, Andrei Burlakov served as Deputy General Director of the Financial Leasing Company (FLC). In 2009, he was arrested by the grandfather about embezzlement in the FLC, which was conducted by Nikolai Budilo, an investigator of the SC Central Department of the Ministry of Internal Affairs in the Central Federal District. Operational support in the case was handled by the operative of the Ministry of Internal Affairs of the Russian Federation Alexander Andreev. Upon his release, Burlakov learned that during his involuntary absence, the director of Lanariko Consulting Limited Sergey Volkov without the approval of the shareholders (that is, the owners) signed documents on the sale of the building. Moreover, operas Andreev actively participated in the negotiations. After the change of a number of nominal owners, the building turned out to be in the structures controlled by Marina Sechina. At the same time, Sechina and Andreev are extremely close to each other people. The FLK was bankrupt under the control of the Interior Ministry, after which the assets of the FLK were acquired by the Independent Technologies (NT) and Stankoflot firms for 1.7 billion rubles. After which Andreev hastily resigned from the Ministry of Internal Affairs of the Russian Federation and ... headed “NT” and “Stankoflot”. Then Andreev became a co-owner of Stankoflot, and Maxim Kretov at that moment, Marina Sechina’s favorite, became its second owner. And then Kretova in the founders of Stankoflot was replaced by Marina Sechina herself. Nikolay Budilo, continued to work for a long time in the Ministry of Internal Affairs of the Russian Federation, led high-profile cases in the Investigative Department and recently quit, finding a good place in RT-Chemcomposite JSC. Now friends are together again. JSC RT-Chemcomposite, where the deputy director of Budilo, also has a "daughter" - ONPP "Technology" named after A.G. Romashina. And "Technology" them. A.G. Romashina delivers government contracts for gigantic amounts to Stankoflot, where the founders are Alexander Andreev and Marina Sechina.

As for Andrei Burlakov, he tried to fight in the courts for the building on Raushskaya after leaving the pre-trial detention center. And then he was shot dead by killer Ruslan Yurtov at the Khutorok restaurant in Moscow, who was part of Aslan Gagiev (Dzhako). Here is how this crime is described in the materials of the case, which has Rucriminal.info. "September 29, 2011, Dzugutov GZ, not being aware of the instructions of Gagiev A.M. to commit the murder of Etkina A.N., involved in the commission of the crime a member of the criminal community U.Kh. Gutiev, who was supposed to track down A.A.Burlakov with him, and after committing the crime, pick up R.V. Yurtov, if this is not succeed Yashkin E.I. Then, Dzugutov GZ, acting in concert with the participants in the criminal community Yashkin E.I., Yurtov R.V. and Dzhioev AB, while driving an unidentified car, arrived together with Gutiev U.Kh. to the area of ​​the Khutorok restaurant and, moving around the specified area, periodically drove past this restaurant in order to find AA Burlakov, who regularly visited him. Driving once again past a restaurant, Dzugutov G.Z. and Gutiev U.H. noticed the car "Bentley Continental", which was used by A. Burlakov for movement, about which G.Z. Dzugutov immediately, by means of a secure telephone connection, R.V. Yurtov was informed

On the same day, September 29, 2011, at about 5 p.m., Y. Yashkin, in an unidentified Honda Accord car, brought RV Yurtov, armed with an unidentified 7.65 mm caliber pistol, equipped with a silent shooting device and equipped with ammunition in an amount of at least 5 rounds, to the Khutorok restaurant located at 37 Leningradsky Prospekt, Moscow, building 3. After about 10 minutes, R. Yurtov entered the restaurant premises Khutorok ”and for the purpose of murder, acting jointly and in coordination with other participants in the crime, produced l of the specified pistol of at least 3 shots in A. Burlakova and at least 2 shots, in the one with the last Etkin A.N., causing both gunshot wounds. "