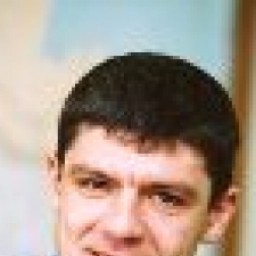 Bio:
Dmitry Nikitin  was born  on 19 September 1971 in Novosibirsk. In 1993 he graduated from  St. Petersburg Institute of Communications as a  shipping engineer .
Since 1993 he has worked as a transport manager for  Eurosib SPb closed corporation.
In 1998  he headed  transport department of the company.
Since  March 2000,  after the restructuring, he has been the director-general of Eurosib managing company.
Nikitin is included in the annual ranking of 1000 professional Russian managers made by the Russian Managers Association.
Source: Lobbying.ru

Eurosib  was founded in 1992 by manager of the West-Siberian railway  Nikolai Nikitin, who moved  to St. Petersburg from Novosibirsk. Some members of  Nikitin's management team went after him. October Railways became a co-founder of a new commercial enterprise. October Railways now accounts for 8% of all goods transported by rail, so owing to partnership with the government  in  the most important transportation branch, Eurosib immediately become a rail transport leader in the St. Petersburg region  and gained a foothold in the market.

In the mid-1990s the most profitable and highly appreciated talent of the forwarding agents was  their communication skills  which help them arrange deals with workers of railway  stations and load the goods of a customer into wagons that were unregistered and ''unseen''.

In 1999  Eurosib SPb was managed by Sergei Aksenenko, a nephew of  First Deputy Prime Minister Nikolai Aksenenko. In 1994 the company started its business activity from cooperation with October Railways. Eurosib sold metal, Japanese cars and  provided maintenance service.
Sergei Aksenenko was  well-known in St. Petersburg, especially in Baltisky bank to which  Eurosib owed tens of thousands dollars. Aksenenko's  business partner Nikolai Nikitin helped him in his financial problems and shortly  after, on 7 January 1999, was shot dead at the front door of his house.

Since 1999  Eurosib has been controlled by the heirs of the founder of the company Nikolai Nikitin, including his son  Dmitry Nikitin, the director-general of  the managing company.

Eurosib was first mentioned in the documents of the Accounting Chamber after workers of several railroad depot of October Railways had applied to the trade union.  They  complained about  repeated wage delay. The money was delayed by Baltic Bank,  which services more than 300 railway companies of October Railways. But close investigation discovered that the main debtor was Eurosib  which owed to the bank about  1, 5 million dollars. According to the Accounting Chamber, Sergei Aksenenko used a simple scheme. October Railways received payments for export and import  traffic  not directly but through Eurosib company.  But the mediator was, to put it mildly, not punctual sometime.

According to experts, October Railways, in fact, provided Aksenenko with interest-free loans that could reach 40 million rubles a month.

In 2000 Sergei Aksenenko joined BaltTransServis company. Almost all managers of Eurosib followed him.

In 2002  the media called Eurosib a family firm of Nikolai Aksenenko dependent on his bounty.

In 2011  Dmitry  Nikitin was ranked  37th  in the list  of 100 richest people of St. Petersburg, whereas  the previous year he was ranked 22. Nikitin's wealth is estimated at 10.3 billion rubles.