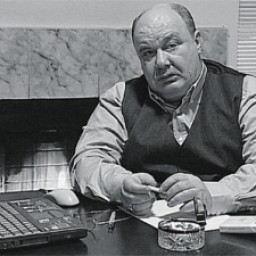 Semion Mogilevich (Sergey Shnaider) was born on June 30, 1946 in Kiev.

1973 convicted for violation of currency regulations

1975 convicted for buying up gold from the emigrants

1990 He emigrated to Israel, then to Hungary

1994 He represented Russia and former USSR republics at the meating of world's criminal dons in Italy.

1995 UK law-enforcement agencies instituted criminal proceedings against Mogilevich for money-laundering in London's banks. The U.K. refused him entry and issued an arrest warrant. He moved to the USA.

2003 In the USA he is charged with rigging the financial accounts of YBM Magnet International, racketering, money laundering and other crimes.

24 January 2008 He is arrested in Moscow by the economic security department of the Ministry of Internal Affairs on charges of tax-evasion as an owner of Arbat Prestige company.

April 2011 Mogilevich and Nekrasov's case was dismissed due to absence of crime.

Mogilevich holds citizenship of Russia, Ukraine, Israel and Hungary. According to some reports, he has about 15 passports, but the FBR believes he uses Russian passport. His alias include Seva, Don Simenon, Simon, Suvorov, Semon Palagnyuk and Semen Telesh.

He is married and has four children.

According to the police, Mogilevich was introduced to the world of crime in the beginning of the 70s. He was illegal currency dealer, affiliated with Lyuberetskaya and Solntsevskaya gangs. There is evidence that he was a founder of Solntevskaya criminal group.

Mogilevich earned his first million as a jewellery agent who was buying up works of art and jewellery from Jews, emmigrating from Kiev in the 80s. He promised to pay money for the objects in Israel, but in most cases money went into his pockets.

According to the CIA, at the beginning of the 90s he sold several surface-to-air missiles and 12 armoured personnel carrier to Iran for $20m. In 1995 he moved to North America where he found 2 large companies - YBM Magenex International and FNJ Trade Management.

YBM Magenex International shares scheme infringed $150m damages to the investors. Mogilevich and his accomplices Igor Fisherman and Anatoly Tsura are wanted by the FBR. The charges brought against them include 45 counts: extortion, securities fraud, electronic crimes, money laundering and fraudulent mail.

According to Russian Customs, the Bank of New York was involved in the laundering of the proceeds from the imported goods. The Federal Customs Service (FCS) filed an appeal against the bank. The trial began on January 14, 2008 at a Moscow’s Arbitration Court. The Bank of New York officials demanded the trial, iniciated by the FCS, to be stopped, because they claimed American lawyers of the Russian Customs had no right to appeal in a Russian Court.

Mogilevich was a participant of the agreements signed between National Joint-Stock Company Naftogaz of Ukraine, Gazprom and RUE in January 2006.

In autumn 2001 it emerged that Mogilevich had met Bin Laden’s representatives in a view of selling terrorists enriched uranium stolen somewhere in the former USSR.

On January 2008 Mogilevich and Vladimir Nekrasov, the owner of cosmetics chain called Arbat Prestige, were arrested on charges of 50 million roubles ($1.7m) tax evasions. Mogilevich was called true owner of the company.

Charges against former head of Arbat Prestige chain Vladimir Nekrasov and his alleged business partner and former advisor to Evergate company Semion Mogilevich dropped. From the beginning Nekrasov and Mogilevich rejected their guilt and claimed the case was an attempt to raid the successful company.

List of accomplices of Semen Mogilevich in the 1990s (made by Interpol headquarters):

AGAYEV, Chengeez, born on May 21, 1957, citizen of Russia, lives in Moscow. Agayev was arrested by the Czech Republic police in May 1995 in Prague in U Halubu restaurant.  He was also suspected by the German authorities of being member of a criminal group and of money laundering in connection to Transfer on License and Finance SAH.

ALEKSANDROV, Aleksey Viktorovich, born on December 4, 1959, citizen of Russia, MOGILEVICH’s assistant and head of Arigon Ltd. He headed Arbat International. He owns 25% in Russian Petroff-Bank in Moscow.  He had a Czech residential permit from Jun 2, 1993 till June 9, 1995, when he worked at Arigon CS Ltd. On June 9, 1995 he was banned from entering the country for 10 years. According to Prague National Central Bureau, in August 1995 British authorities banned ALEKSANDROV from entering the country for life.

FISHERMAN was president of United Trade Ltd in the Cayman Islands. He was also vice-president of Arigon, USA, in charge of financing projects in Europe.

      KULACHENKO, Anatoly, has Greek and Russian passports. He established Arbat International in Russia and was partner in Arigon in Budapest and on the Channel Islands.

      TSURA, Anatoly, financial assistant to MOGILEVICH . He has a Russian and an Israeli passports.

      VESSERMAN, Mikhail, born on December 7, 1949, has an Israeli passport № 5271388. He worked for MOGILEVICH in the Czech Republic and was a business partner in Prague in Arigon, Leman, and Asma-Fia.

Sergey Mikhailov was directly involved in the establishment of following companies set up by Semen Mogilevich:

In 1992 Mogilevich received a passport issued for Semen MOGLERICH, Semion MOGLARITS. He may possess Ids as Semen TELES or Semen TELECH.

In Kiev he lived at his wife’s at: