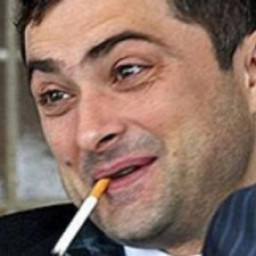 Vladislav Surkov was born on 21 September  1964  in   Solntsevo village, the Lipetsk region. According to  other sources, he was born  in 1962  in Duba-Yurt village,  the Chechen-Ingush Autonomous Republic. When Surkov was five years old his mother and him moved to Skopin city in the Ryazan region. In 1982-1983 he studied at the Moscow Institute of Steel and Alloys  but then applied for a discharge. In 1985 -1988 Surkov studied at the faculty of mass perfomance direction of the Moscow Institute of Culture but was expelled for a fight with a fellow student. In 1999 he graduated from the International University in Moscow.

In 1983 - 1985 he served in the Soviet Army, in an  artillery unit of the Southern force group in Hungary. However, on 12  November 2006  Russian Defense Minister Sergei Ivanov disclosed secret information: Surkov served in the special mission unit of the Main Intelligence Directorate.
In 1987 he headed an advertising department of the interdisciplinary research centre under the Frunze district committee of Komsomol. The centre was directed by Mikhail Khodorkovsky.

In 1992 he was president and vice-president of the Russian Association of Advertisers.

In 1991-1996 he held executive positions in Menatep Group of companies also managed by Mikhail Khodorkovsky, subsequently in Menatep Bank.

In 1996-1997 he was a deputy director, then the head head of PR department of  Rosprom closed corporation and first deputy chairman of  Alfa Bank.

In 1998-1999 he was the first deputy director-general and  PR director of Russian Public Television public corporation.

In 1999 he became an assistant head of  the Presidential Administration.

In August 1999 - March 2004 he was a deputy head of the Presidential Administration.

In March 2004 he became a deputy head of Russian Presidential Administration and an assistant to the President of the Russian Federation.

On 15 May  2008 Surkov was reappointed first deputy head of the Presidential administration. This time the president was Dmitry Medvedev.

In June 2010 he joined the board of trustees of  Skolkovo foundation.

Since the very start of his advertising career Vladislav Surkov preferred to take a shortcut in settling issues. Thus, in 1990 he paid a  tidy sum to editors of Stolitsa  magazine  for  promotion of Menatep Group. That kind of activity was not legally regulated at that time so both publishers and advertisers acted  at  their own risk.

By the first half of 1990  lobbying practice had not been integrated in the State Duma yet.  Since the Soviet time there had been a simple game plan  left:   a faction leader was summoned to the Kremlin, told what to vote for and promised a recompense and a kickback. Everything else went without system. Surkov and his associate deputy Vadim Boiko were rumoured to develop lobbying tactics and   price list for services offered by Parliament members. The duo put it on a scientific basis and organized  complicated and multilevel lobbying system.

In 1997  Surkov felt unappreciated and  asked management of Menatep Group and Mikhail Khodorkovsky personally  to make him  a partner, let him took part in managing the group and  raise his award fee for each official bribed. Khodorkovsky flatly refused to do that. Being too ambitious, Surkov quit  Menatep Group. Since then his  rancor has been much spoken about.
Source: forum-msk.org, 21 December 2005

While working for the TV company owned by Boris Berezovsky, Surkov said,  "It's a myth that Boris Berezovsky does what he likes. The more so because Berezovsky is not a man of the conflict. On the contrary, he tries his best to avoid all these wars in future.''

Later, when invited to the Kremlin  with Berezovsky's assistance, he had a hand in driving him out of media space. In 2002 Surkov said, ''Berezovsky seeks for a conflict. Obviously, he finally realized that he would get nothing from the people close to the president and went to the provinces to foment a rebellion."

In  autumn 1999   experts  called Surkov  "a brilliant communicator " and  "a creative PR expert and consultant  able to anticipate certain events."    Surkov's first brainchild was reported to be Unity election bloc founded in 1999 as a counterweight to Yevgeny Primakov's  and Yuri Luzhkov's Fatherland is  the whole Russia bloc that was gaining popularity at the moment.  Actually, Surkov borrowed an  idea of ​​establishing a powerful alliance of the regional officials  loyal to the Kremlin  from  Boris Berezovsky and former deputy head of Presidential Administration Sergei Zverev.

After Unity  had allied with  Fatherland  Surkov, while speaking at a meeting of Fatherland's members in July 2001,  said that at last it was possible to correct " a historic mistake"  and to overcome the "cleavage" between  Unity  and   Fatherland   which had  formerly been political opponents. In 2003 the bloc  was renamed as United Russia political party. Surkov   at the same time was called  a co-founder and  the main  ideologist  of United Russia  as a "party of the power".  Surkov was also said to lead the party to victory in parliamentary elections in December 2003.
Source: RIA Novosti, 11 July 2001, Political news Agency, 22 April 2005

Surkov was  directly involved in establishing  several youth movements in Russia. For instance, he was associated  with  Going Together pro-presidential youth movement  founded in 2000. The movement was headed by former employee of the Presidential Administration Vasily Yakimenko. The first major event arranged by Going Together  was a meeting held in the centre of Moscow  on  7  November 2000. The movement brought together about 6000 people who called upon for "no drinking", "no smoking", "no using dirty  language" and for ''supporting  Vladimir Putin''. Going Together  was reported to be  "a failure"  as the movement  became  notorious for its narrow-mindedness and eventually began to discredit Putin in the opinion of both domestic and world public. Going Together was reported to be founded only for money making.

In 2005  The Ours movement was established to replace Going Together. On 21 February  2005  in St. Petersburg  Surkov and Yakimenko met with  "commissars" of the new youth movement.  They tried to avoid the attention of mass media.

Surkov and Yakimenko promised to their supporters that by 2008  a new "party of the power" would be founded on the basis of  The Ours. They  emphasized that their plan had been approved by Vladimir Putin.

In  summer  2005 3000 activists from 45 regions of Russia gathered at the camp of  The Ours on Seliger lake. Advisor to the head of the Presidential Administration  Gleb Pavlovsky  arrived at the rally and urged the activists to be ready  "to resist physically attempted unconstitutional coup".  Surkov, in turn, said,  "Grow up quickly and we will give you the country." The Ours soon got low reputation and, in fact, repeated all the mistakes of  Going Together.

Surkov's original philosophy is that there is no freedom in the world. He believes that all democratic systems  are actually manageable, so that the key to success is the ability to influence people  giving them an illusion of freedom  despite  virtual governance. According to Surkov, the only freedom is "the artistic one''.

And so in 2006 Surkov  developed an unconventional concept of "sovereign democracy" and took part in establishing the second wing  of the political system in Russia, Just  Russia, that was to become a party to a full-fledged  two-party system. It is therefore suspected that Surkov contributed to liquidation  of Yukos in 2003. His grudge against Khodorkovsky only aggravated the conflict, but the real reason was  Khodorkovsky's attempt to finance  SPS opposition party and the Communist Party, that is, to beat Surkov.

In 2011  Surkov masterminded the ban on initial public offering of the securities of Domodedovo international airport  in London. Government bodies had been coming  on the largest private airport in Russia since  summer  2010 when  Master Bank, which serviced Surkov's agencies, refused to meet their credit obligations attached to the securities of a contractor of Domodedovo airport for about $ 1 billion rubles.

The largest action of the campaign against the owners of Domodedovo was a terrorist attack at the airport on 24 January  2011  in which 35 people were killed. A few hours later Surkov's analysts reported to president Medvedev  that primary responsibility for making the attack possible should be  imposed  on  the airport administration. The report seemed to be carefully prepared beforehand.