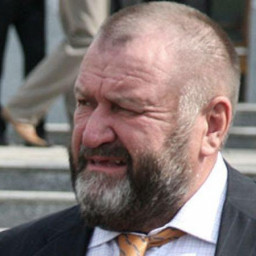 In 1999 - a shareholder holding "Sibuglemet", receiving a stake for the mine "Polosukhinskaya."

In 2003, he was vice-president of the Sibuglemet holding company.

In March 2009, personally conducted an excursion to Vladimir Putin at the Polosukhinskaya mine.

He is married and has a daughter. President of the sports club "Siberian Ring".

However, the people of Shchukin underestimated the opportunities of London businessmen. Today in the Arbitration Court of the Kemerovo region, several cases are being heard on the recognition of the invalidation of the mines removal deal. The fact is that the director of the mine did not have the right to dispose of the property of shareholders, which was the mine, and two years later the British company initiated a process demanding to return the lost assets to it. In the course of the proceedings it was found out that there was no contract for the sale and purchase of objects - it was neither the plaintiff, nor the defendant, nor in the registration documents.

The place of house arrest for the tycoon of the 66-year-old Alexander Shchukin became one of the settlements of the Novosibirsk region (his Moscow lawyers were ready to deposit 10 million rubles). "The court took into account the age and state of health of Alexander Filippovich (Shchukin .-" b "|), the degree of his participation in those actions that are incriminated to the whole group, and probably the fact that the asset in question still remained owner, and was not in the ownership of a group of companies controlled by Shchukin, that is, there is actually no damage, "attorney Yelena Yulova said. At the same time, referring to the lawyer's secret, she refused to say whether her client would admit or not. Earlier, Vice-Governors Danilchenko and Ivanov reported about their innocence in extortion of shares.

11/23/2016 KuzPress., "The entrepreneur Alexander Schukin" contributes to the investigation. "

Alexander Shchukin "squeezed out" assets from the British, "lighted" his shadow capital in an English court and got into the development of the Russian Interior Ministry. The deal is that to manage his foreign assets, Alexander Schukin registered Upminister Trading Limited on the Isle of Man. But in 2005, the Maine tightened control over nominal directors, introduced licensing of companies providing trust, secretarial and registration services, and thus effectively ceased to be an offshore company. Upminister Trading Limited immediately changed the "residence permit", "moving" to Gibraltar.

In early 2017, the site of the Center reported itself as a company that "includes more than 40 stores with a total of about 1,500 employees." About the reasons for the curtailment of the Pensioner's business and the CPC, the representatives of the companies did not even inform their employees. Only in the case of the CPC, one of the suppliers of this company suggested that the closure is related to the "current status" of the Novokuznetsk businessman Alexander Shchukin, who is considered the owner of the CPC and who "leaves his businesses". In November last year, Alexander Shchukin was accused of extorting shares in AO Razrez Inskaya (along with two deputy governors of the Kemerovo region, a former head of the Investigative Department of the Russian Federation in the Kemerovo region).

Meanwhile, the Russian assets of his father-in-law - Alexander Shchukin - are melting away before our eyes. Dividends from the Polosukhinskaya mine in excess of $ 100 million turned out to be in the same Cypriot off-shores, the company Centerprodservice and the chain of grocery stores "Near", covering half of the Kemerovo region, sold completely, the family-owned car dealerships are closed, agricultural assets are waiting for buyers. Ildar Uzbekov quickly gets rid of "grandfather toys", while Shchukin himself is forced to be under house arrest.

Further development of events is not difficult to predict. If Shchukin, through the diligence of a caring son-in-law and his lawyers, gets a real time and permanently ends up in places not so remote, then the chief administrator and beneficiary of the family business becomes Uzbek. Since the strength and depth of his kinship feelings he has already demonstrated, obviously, his next step will be a divorce organized in such a way that the basic, if not all, assets of the Shchukin family are at his disposal. British citizenship with Uzbekov already exists, Cypriot offshores are full of millions in advance ...

The competitive administrator of the JSC "Investment Fuel and Energy Company" Alexander Furman charges more than 1 billion rubles. losses from the co-owner of the company Alexander Schukin, accused of extortion of shares in the section "Inskoy". He sent the relevant petition to the Arbitration Court of the Novosibirsk Region. According to the manager, the losses arose as a result of the conclusion of surety contracts and the assignment of the right of claim in 2014 and 2016. In late December, Mr. Shchukin filed a petition with the court to recover from Alexander Furman a similar amount. The court will consider the application this week.

12.02.2018., Kommersant., "More than 1 billion rubles of losses are collected from businessman Alexander Shchukin."

In 2009, Ildar Uzbekov married the daughter of Alexander Shchukin Elena, and, according to the case file, "due to family ties with Mr. Shchukin, Ildar Uzbekov gained access to significant sums that the Shchukin family wanted to invest outside of Russia." The significance of these sums can be judged from another, already mentioned above, foreign proceedings - at the Royal Court of London.

At the hearing, an English businessman, Burford, said that "Ildar Uzbekov committed to the transfer of the amount of 250 to 400 million euros of capital under the management of Fern over the next two years, taking into account the transfer of 1 billion euros under the management of Fern during the subsequent five years ". And he explained the origin of this money - these are the means withdrawn from Russia by Shchukin, and which he wants to invest abroad.

Obviously, one of such investment objects Ildar chose Bioversel Group. "In October 2010, Uzbekov told the management of the Bayouglass Group that he had at his disposal $ 20 million, which are intended for investment in biodiesel business on behalf of Mr. Shchukin," Arieu Mazur said at the hearing. As confirmation of the seriousness of the intentions, Ildar handed over a guarantee letter from the Swiss private bank Clariden Leu Ltd., issued to his test. And Ariez Mazur handed this document to Ontario.

During the investigation, FSB officers found out that in the fall of 2015 Alexander Shchukin, a Kuzbass coal magnate, a regular on the Forbes list, owner of several mines, car dealerships and a dozen other enterprises, was in the eye of Zakharchenko. And on November 13, 2015, a request was made to Interpol asking for assistance in obtaining information on a number of offshore companies in order to verify the suspicions of tax evasion from the anti-corruption ministry of the Ministry of Internal Affairs and the withdrawal of several hundred million euros from Russia.

Novosibirsk Regional Court today once again extended the term of house arrest to the defendants of the case for extorting a controlling stake in the coal mine "Inskoy" worth more than 1 billion rubles. At the request of the Investigative Committee of the Russian Federation, under the house arrest until September 13, 2018, there will be two former vice-governors of the Kemerovo region, Alexander Danilchenko and Alexei Ivanov, ex-regional administration official Elena Troitskaya and businessman Alexander Shchukin.

06/07/2018., Kommersant., "Two former vice-governors of Kuzbass will remain under house arrest until mid-September."