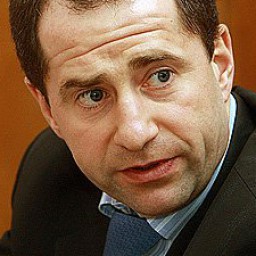 1990 - graduated from the Ryazan Higher Military Command School of Communication

1998 - graduated from the Moscow Institute of Economy, Management and Law

2000 - graduated from the State Academy of Management

November 2002 - February 2003 - the first Deputy of the Head of administration, chairman of the Chechen Republic Government

February 7, 2003, resigned from the post of prime minister of the Chechen Republic Government because of disagreements with the head of the Chechen administration, Akhmad Kadyrov (particularly in financial management) and was released on decree of the President of the RF

July-December 2003 - Assistant of the Minister of Economy Development and Trade of the RF (G. Gref)

December 7, 2003, was elected to the State Duma of the fourth convocation from Kineshemsky election district № 81 in the Ivanovo region; was awarded with the Order of Friendship; Married and has two children.
www.ladno.ru/person/babich/bio/

Prior to 1996, Mr. Babich was considered an ordinary jobless Russian. But in 1998, Mikhail Babich suddenly became the vice-president of JSC "Rosmyasomoltorg." This commercial structure supplied the Russian security agencies with uniforms and food. Then, in 1998, "Antey" (Babich was one of its leaders) became the owner of a controlling stake of OJSC "Shuiskys chintz", and Mikhail Babich – the Chairman of the Supervisory Board of this enterprise. Subsequently, he was appointed to a post of the first deputy director of the Federal Agency for Food Market Regulation at the Ministry of Agriculture; however he kept his connections with the military.

Thus, in early 2000 Babich became the "chief of the financial part» of the pre-election headquarters of Gromov, who was running for governor of the Moscow region. Gromov won the election which resulted in Babich appointment to a position of the vice-governor of the Moscow region on economic and financial issues. By the way, mass-media held the information that in many respects Babich owed his appointment to a very authoritative master - Leonid Terekhov, the one who headed a very powerful inter-regional "economic" group that time. But Babich did not hold this position for too long. The official had a big quarrel with the main creditor of Guta Bank, trying to carry out the task of governor to review the loan agreement (the Moscow region budget had debts of $ 40 million hanging, which had been made by the former governor, Anatoly Tyazhlov).

In a few months after the Babich’s new appointment, a criminal case number 9247 was open on the fact of fraud in the open society “Rosmyasomoltorg ", and Mikhail Babich became the main figure in there. The management of "Rosmyasomoltorg" was suspected of embezzling 2 billion of non-denominated rubles which had been obtained from the sale of products, received under the programs of American and European humanitarian aid to the Russian pensioners. It came out that the products from the U.S. and EU firms had been shipped not to the official companies-operators, but to the commercial structures acting as intermediaries, such as "Antey", "Prodteks", "Azimuth", "Gazinvest", "Crystal Plus and some others. Babich completely denied his fault, saying to the press that certain commercial structures had been operating against him, obviously hinting at Guta Bank. As a result the two billion rubles plunder had been assigned to Babich's successor - Dmitry Ilyasov, a top executive of the corporation "Antey".

Boris Gromov did not intercede for his protege. According to some reports, Babich dissatisfied strongly the general’s fellows, who considered Babich an upstart. They also said that the young man got into affairs of commercial structures belonging to Iosif Kobzon, a great friend of the general.

As a result, Mikhail Babich stayed in the Moscow region till August 2000 only. The Vice-Governor of the Finance and Economic Affairs was dismissed with the official wording - "for a one-time flagrant infringement of labor duties and due to the termination of the access to state secrets." Babich appealed against his dismissal in court and was reinstated in his post, which he resigned on his own will immediately after.
"The Government of the Chechen Republic has been headed by "butcher "Mikhail Babich, Newspaper.ru, 14.11.2002

By March 2001, Mikhail Babich had come under the wing of the Ivanovo region governor, Vladimir Tikhonov. By that time they had been already very familiar, they shared common business interests. Babich headed the supervisory board of the “Shuiskiy chintzes”, "the company, which Vladimir Tikhonov had once led himself. In this regard the history of obtaining a controlling stake of the Ivanovo garment factory was rather indicative. The stocks were taken with force. The heads of the factory were beaten and then Babich, who was in Moscow, called them and asked: "Well, you sell the shares?" A court sentenced the executors to four years of imprisonment. Meanwhile the "customer" remained at large.
Radio Liberty, 13/11/2002

In the administration of the Ivanovo area Mikhail Babich obtained a post of the first deputy governor, combining it with a post of the head of the Area Mission in Moscow. He was engaged in economics and finance affairs like at the Gromov’s headquarters, focused on supervising the most profitable industries - alcohol and logging. Then a saying appeared "The money is, where Babich is”.

Indeed the money came to Ivanovo mainly from Moscow. Babich made a good deal with the company "OST-Alco”, which bought a controlling stake in Petrovsky alcohol plant for $ 3 million. Tikhonov doted on his ward (by the way, Babich easily disowned his boss, when he was accused of bribe taking). But Babich managed to displease the governor's team again. His main enemy became the head of the regional Department of Internal Affairs, Gennady Panin. The latter initiated inspection of an alcohol plant sale agreement. The documents were transferred to the Prosecutor General's Office, which conducted its own investigation. But any way this story had no effect on the well-being of Mikhail Babich.

However the story of the Ivanovo area representative office creation in Moscow had almost taken Babich’s freedom. This structure appeared in the regional administration on initiative of Tikhonov, although many members opposed him: the residence maintenance in Moscow cost about 5 million rubles. Exactly the same amount required the health and education development in the Ivanovo region.

The representative office got searched. The arrest warrant of Babich, who was in Moscow at the time, was issued. But the official managed to leave the capital. Soon the case against Babic was stopped thanks to the telegram which Ivanovo Governor, Tikhonov sent to the president of Russia, Vladimir Putin. Later on the Anti-Corruption Commission of the State Duma many times asked the General Prosecutor on why the criminal case number 9247 had gone from life untimely. The responses were so obscure, that a lot of rumors and speculation on this subject – appeared – they even said that Babich, as the deputy chairman of the Moscow region was in relation with Boris Berezovsky and was involved in some banking stories in Moscow region, in which some former odious workers of the State Office of Public Prosecutor had been spotted.

But all these scandals did not spoil the reputation of Michael Babich. Despite everything, he confidently walked up the career ladder. In November 2003, Babich was appointed chairman of the Government of the Chechen Republic. In Chechnya the appointment was not met happily. "He's too young, besides, he was actively lobbied by the special services. A FSB protege is coming to us"- one of the ministers of Chechnya said. The only "good" reason for the choice made by Akhmad Kadyrov, was that before his release to reserve in 1995, Captain Babich served in Chechnya.

But Babich did not stay in this position for too long also. He set a record of time being in the office - almost three months. The scandal happened because of resignation of the Minister of Finance of the Republic, Sergei Abramov, which “bypassed” Babich. 3, 5 billion rubles had been assigned in the federal budget-2003 for the reconstruction of Chechnya -and Babich could not allow the distribution of such amount of money pass without his control. Babich started protesting out loudly. In his turn Kadyrov went angry; he was not accustomed to washing dirty linen in public. Kadyrov flew to Moscow and as the result of consultation in the presidential administration he said that "the issue with Babich is solved”. The next day after his meeting with the President Vladimir Putin, Babich resigned the post.
Premier of Chechnya, Mikhail Babich resigned his post less than in three months", ID" Kommersant ", 10.02.2003," Babich - a captain who was not destined to become a major, "Stringer, 19.04.2005

In July 2003 the Minister of Economy Development and Trade, Herman Gref appointed the ex-prime minister of the Chechen Republic, Mikhail Babich to the post of his assistant. Babich did not have enough time to be noted by anything at that post because shortly after that he was elected to the State Duma. Perhaps, legislative activity turned out to be too boring for him, because yet in 2005 Mikhail Babich had his sight on the post of governor of the Ryazan region. Before that he dreamed of a chair of the Ivanovo region governor, but his hopes could never come true. Ivanovo region was headed by the Vice-premier of the Moscow region, Mikhail Men. Of course, Babich as a disciplined "United Russia" member welcomed in words the approval of the party member in the governor's office.

Babich decided to compete with the Ryazan Governor, the General Georgy Shpak by using his main weapon -the membership in United Russia. The fact that he had been directing the general’s election campaign until the recent times, did not bother Babich. For his game he used scandalous accusations against Georgy Shpak of Kasimov’s entrepreneur, Natalie Suchkova. She claimed that the general had borrowed from her 48 million rubles for the election campaign and promised her the vice-governor's post in return. And then the officer broke his word. A lawsuit was filed in the Supreme Court of Russia with a demand to cancel the voting results. But Shpak proved that all charges against him were a pure bluff. Babich went on the rocks on that case.
The secret of supercareer of M.Babich, "Our version, 20.03.2006, the former prime minister of Chechnya, Mikhail Babich became Herman Gref's assistant, NEWSru.com from 11.07.2003

LatelyMikhail Babich has been tirelessly demonstrating loyalty and devotion to the "United Russia". Babich leads the Public chambers of the Prime Minister, Vladimir Putin. Babich keeps initiating criminal proceedings against those who dare to threaten on the party leaders. For instance, in 2008 Mikhail Babich saw the crime in one of the news stories by “TV-6 Vladimir" that contained the words "puting" and "loyal putinists". In support of Vladimir TVmen spoke the Local Union of Journalists. In the opinion of the human rights activist, "greater delusion than this case, one could not even imagine." Incidentally, the case ended with nothing.
From puting to tsugunder, Gazeta.ru 11.01.08