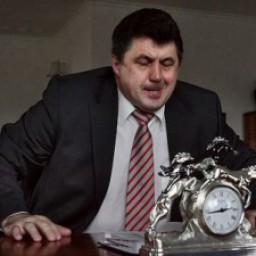 Aleksandr Chernogorov (born 13 July 1959, Vozdvizhenskoye village, Apanasenkovskoye District, Stavropol Region) went to Novopavlovsk secondary school no.1 in the Kirovsk District of the Stavropol Region. In 1976 he finished school. In 1981 he graduated from the faculty of mechanized agriculture if the Kuban Agricultural Institute.

1982-1983 komsomol trainer, deputy head of the department for young workers and rural youth in the komsomol of Stavropol Region

On 16 November 1996 he was elected the governor of the Stavropol Region.

On 18 December 2000 he was reelected as the governor of the Stavropol Region.

On 31 October 2005 according to the proceedings, he was renominated for the governor of the Stavropol Region for 5 year term.

On 22 April 2008 he resigned as the governor. On 16 May Dmitry Medvedev, president of Russia, accepted his resignation.

In January 2009 he was appointed deputy minister of agriculture of the Russian Federation.

Chernogorov is a member of the State Council of the Russian Federation, PhD in economics (2004), professor (2004). He is a retired colonel.

In July 2003 Chernogorov received the honorary citizenship of Stavropol. However in February 2007, before the election to regional legislative council, incumbent members of the council stripped him of the title, because he «did not justified their confidence».

He was married for the second time to Irina Shchukina. He has 3 children - 2 daughters and son. In 2007 Chernogorov filed a lawsuit to obtain guardship rights in respect of his son Aleksandr. Stavropol’s Leninsky District Court ruled in favour of the governor. The appeal against this decision by his wife Irina was turned down. In April 2008 the Court of the Stavropol Region upheld the decision of the district court and ruled that the son should live with his father.

Chernogorov was reported to have maintained close ties with no.1 Chechen terrorist Shamil Basayev and his men since he took the office of the governor of the Stavropol Region in 1996. The newspapers quoted his colleagues.

Member of the legislative council of the Stavropol Region Andrey Razin who has worked with Chernogorov since 1997 said: “Chernogorov provided personal guarantee for oil-for-grain supplies in Stavropol. He told me that the oil came from Baku, and indeed papers were from Baku. But the person, whom Chernogorov introduced as an advisor to the Azerbaijan president, was Basayev’s man. In fact oil tanks came from Grozny. Chernogorov distributed fuel among the farmers, but the farmers refused to pay, because the fuel was bad. The things had to be sort out. The war had already begun when after Chernogorov's call Basayev's representatives easily crossed the border and military zone and met the governor right in his office. They demanded he pay $1m for oil. Chernogorov asked me to help. I said: “My friend, it was you who brought the oil, now you are to be in charge”. He promised to pay with grain. As far as I am concerned, I believe he paid them”.

Facts prove Chernogorov’s murky interests in Chechnya. He was invited to the swearing-in ceremony for Chechen president Alu Alkhanov at the end of 2004. He came to Grozny alone, he did not even take his spokesman. Most likely that besides official meetings the governor had private talks and did not want anyone to know about their subject.

In 2005, when Chernogorov was nominated for the governor by the president, the media mentioned his name in relation to the complaints of a village lady from the Stavropol Region during Putin's televised questions-and-answers session, broadcast on 27 September 2005. The lady called in and complained about lack of running water in a number of villages. In response Putin said that he would not nominate Chernogorov for the next term in the office unless he solved the problem. Eventually the water line (many kilometres long) was installed within just 2 weeks.

On 13 November 2006 Chernogorov left the Communist party to United Russia party. The governor alleged that his membership of the Communist party put obstacles to the development of the region, because the region did not get enough state support. He added that «officials should all be in the same boat»

During the elections to the regional legislative council, held on 11 March 2007, United Russia party with Chernogorov as no.1 on the party list gathered 23.97% of votes and came second after Just Russia party with 37.73%. Stavropol was the only region (out of 14) where Just Russia won the ballot. No.1 on the party list of the Just Russia was mayor of Stavropol Dmitry Kuzmin. Leaders of the United Russia blamed the governor for the defeat. On 15 March Boris Gryzlov announced that Chernogorov was excluded from the party. Next day Chernogorov commented on his exclusion, saying that the governor should, in principle, «be beyond the politics».

In April 2008 Chernogorov handed in his resignation letter. He was reported to step down due to difficult family circumstances (death of his father and major illness of his mother). However in May he returned to work. Political analysts said president Dmitry Medvedev would not nominate a new governor before “sorting out the political conflicts in the region”.

On May 2008 Medvedev accepted the resignation of Chernogorov and appointed deputy minister of the regional development of Russia Valery Gayevsky the acting governor of the Stavropol Region.

In January 2009 it was reported that Aleksey Gordeev was appointed the deputy to minister of agriculture Aleksey Gordeev. Chernogorov said that he was going to work with “social development of rural areas”.

In 2007 Valery Sergienko, member of the State Duma regional policy committee, urged Dmitry Kozak, the presidential plenipotentiary envoy to the Southern Federal District, Yury Chaika, the prosecutor general, Nikolay Patrushev, head of the FSB, and Rashid Nurgaliyev, head of the MVD, to probe into “the facts of violation of law” while selling the right to use 37,3 hectares of natural reserve on the slope of Mashuk Mountain (Pyatigorsk, Stavropol Region) to Kavmineconomcentre LLC.

According to the statement of the member of the Russian State Duma, governor Chernogorov signed the order (no.535 dated 30 September 2005) to transfer “lands in the city of Pyatigorsk, having the status of forest” into “non-forest” land. This was done “in violation of the Decision of the Government of the Russian Federation no.455, dated 3 September 2004, and decision of the Government of the Stavropol Region no.77-4 dated  27 June 2005”.

Sergienko claimed that the land of state natural reserve, worth “at least $12m, according to the minimal estimation” was sold for just 346,890 roubles ($12,000). After the facilities are set up, the price for the land will rise to $60m.

In 2007 Chernogorov’s wife Irina at the meeting with the citizens of Stavropol spoke about the governor’s personal life. He lived with Chernogorov for 10 years. Despite Chernogorov’s claims that he worked for 20 hours every day, his wife said, he spent hours playing billiards

On 4-5 June 2011 Rostekhnologii state corporation held the sports event for ministers, heads of state agencies, governors, executives of state corporations and major companies. Billiard tournoment was very representative… Aleksandr Chernogorov, former governor of the Stavropol Region and deputy minister of agriculture, was third in the competitions.