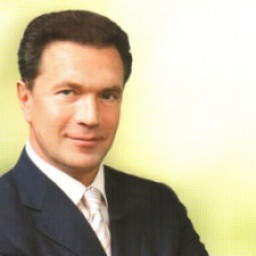 Dmitry Buriak was born on 12 December  1957 in Moscow. In 1985 he graduated from
Sergo Ordzhonikidze Geological Institute in Moscow with a degree in exploration of rare and radioactive minerals. He also graduated from Culture Institute as a cultural events organizer.

He worked at the Diamond Industry Research Institute and was engaged in business activities.
In 1996 he founded Vision International People Group company.

In 2002 he was awarded Mechnikov medal  “for a practical contribution to national health improvement.”

In December 2002, Buriak was awarded in the category Health as a Lifestyle
He is a member of the International Academy of Natural Products and Biotechnologies and a member of London Directors Club.

In 1996, a coup in the network business happened.  A team of 130 people, headed by Frenchman Fabrice Kerhervé arrived in Moscow. By spring 1996, they had managed to recruit five thousand distributors and open a warehouse. The network was ready to work. The last things they needed were investors and a certification of the products, namely, dietary supplements by ArcoFarma company, France. And then businessman Dmitry Buriak came to the rescue. He first met with Fabrice Kerhervé in London, where he had lived for a few years (it was rumoured that Dmitry Buriak was forced to live abroad because he had troubles in Russia ). Buriak told Kerhervé that he had made a fortune on metal trading and then was ready to invest in new business.  According to VISION' s employees, Dmitry Buriak invested about $ 10 million, and on 6 (or 14, according to other sources) July 1996, VISION closed corporation was registered in Moscow.  Fabrice Kerhervé became its president, while Dmitry Buriak was the board chairman and the main shareholder. Mr. Kerhervé was responsible for network promotion, while his companion solved financial problems from London. They got certificates for ArcoFarma products, and the network started to work.
As VISION’s employees state, by 1997 Mr. Kerhervé had managed not only to make the company profitable, but also to repay Buriak the money the latter had invested. In 1998 the company produced a profit. According to the company, in 1998 the network numbered more than 450,000 distributors, while its annual turnover exceeded  250 million dollars. But then the August crisis broke out and Dmitry Buriak returned to Russia (it was rumoured that he had been able to settle his old problems) and took over the company. His first managerial decision was 7.9 ruble-to- dollar rate fixation for distributors who bought products at the warehouse. As a result, income of newcoming distributors increased, while income of leaders, who lived on the sales percentage of those who were recruited, sharply decreased.
The network began to decline and its leaders began to go to the other network companies. Fabrice Kerhervé demanded to raise the rate, and said to Mr.Buriak that he would ruin the company. In response, the board chairman asked the president to quit VISION. Buriak was even rumoured to threaten Kerhervé . The Frenchman left Russia. Most of the leaders left the company after him and took away their networks. Once they were gone, when the stock sales dollar rate was immediately raised to the rate of the Central Bank. The employees believe that the Dmitry Buriak deliberately used the dollar fixation to drive his partner out of the business. In February 1999, VISION re-registered remaining distributors. Their number reduced to 35 thousands. Then Dmitry Buriak decided to extend the network by splitting a so-called distribution package, a box which distributor purchased at the warehouse. Formerly, the box included eight jars of food additives and cost 180 dollars, and then it was four packages of eight small bottles each. The cost of each vial decreased.  As a result, the number of buyers increased, but distributors, however, had to sell several times more to earn the same money  as before.  Network leaders’ income reduced.

In September 2000, 17,000 best distributors gathered at Olimpisky stadium for celebration of the fourth anniversary of VISION  company. The culmination of the two-day holiday was a seven-hour speech by President Dmitry Buriak. The cram-full stadium was plunged into darkness. Only a stage was Illuminated. There was walking a middle-aged man dressed in a white suit. Seventeen thousand people were standing at attention and intently listening to the words that Buriak dropped from time to time. Sometimes he stopped at the edge of the stage and spoke into the darkness “We did it”. The stadium sighed in admiration. Buriak turned away and went into the back of the stage. Then he went back. He said, “We could do it”. And it lasted seven hours.

In 2001, businessman Dmitry Buriak, who earned his net on dietary supplements sales in the network marketing system, decided to diversify his business. He paid attention to the rapid growth in soft drinks market (since 1999 by one billion liters annually) and realized that it was a promising field: using the additive, those as dietary supplements, only liquid ones, one could produce not “common” water, but water for specific groups of consumers, like athletes, pregnant women with osteoporosis, etc.
Buriak hired Aleksandr Garagaty, a  former director of a PepsiCo plant, and spent a year and a half in search of the site with good artesian water in the suburbs of Moscow. Aqua Vision brand was developed by a team of marketers enticed from the Russian juice company, run by Igor Burgard’s Lebedyansky.  BotaniQ umbrella brand drinks were to be available at every price point: Original fruit sauce – in premium products, 1QQ juice - in a segment of one hundred percent juice, Everyday  - in juice drinks markets.
The plant started production in April 2007. Buriak had great plans then. But in July 2007, a Greek company purchased Aqua Vision. In addition to production facilities and brands, Coca-Cola HBC
also purchased already paid advertising contracts.
The deal was very profitable for Buriak: he invested no more than 130 million euro in the plant, but sold it for more than 200 million.
According to analysts, Coca-Cola HBC significantly overpaid: the whole plant was worth 100-120 euro million maximum.

At the end of 2006 Buriak purchased 50% of First Ukrainian Development, a Ukrainian developer company, later renamed as DeVision.

For the last 10 years, the company has been constantly changing its marketing plan and
conditions of commission payments to its distributors.
First, "Karat" was changed to "star", then in 2004, as it was not enough, they introduced "green wave new chance", and recently they have introduced additional conditions for an award of the third and subsequent levels, etc.

All these innovations have the only purpose: to reduce the actual payment to distributors. It is achieved not only by legitimate means (such as changes in the marketing plan), but also with non-transparent methods of commission fee calculation. See below about just one of the pitfalls used by VISION.

In 2009 Buriak registered three Vision companies in Spain, Portugal and Finland through his company, Health Tech Corporation AG. Then he bought these three companies from himself for more than 437.517 dollars, paid by VISION company. After that, less than a year later, he closed the three companies. VISION suffered net loss of 332.452 dollars, while Health Tech Corporation AG made a profit in the same amount. Where is a catch in it? It is quite simply, Buriak holds 100% of Health Tech Corporation, while VISION is a joint stock company and Buriak owns only 60% of the company, the rest are scattered among visionary shareholders. In other words, it was shareholders who suffered all the losses, as once again they are not paid dividends, while Buriak, by this simple action, pocketed several hundred thousand dollars of net profits.

Dmitry Buriak, the board chairman of DeVision, said that the group had suspended a project on Riverside Plaza hotel and office complex at Naberezhno-Hreschatitskaya st., 21  in the total area of ​​43.2 thousand square meters. The project included, inter alia, the construction of a 239 room hotel (four plus rate) under the name of Sheraton.

“The project is frozen. Definitely, we won’t be ready by Euro 2012. For now Sheraton is left, but we are not ready to announce the dates when we begin to work with this site. Before the crisis, the implementing costs were approximately $ 50 million dollars. We are looking for a co-investor or someone who will buy this project out,” D. Buriak said.
Buriak also added that the company had also suspended the development of ZaSpaGolf cottage in Koncha Zaspa, Kiev region. “We have not reconsidered  this project yet. This is a very big project for the market and there is no required demand for it”, he said.
Experts believe that Buriak has not the best time now to maintain VISION, a loss-making company distributing food supplements. On the contrary, he will do everything to squeeze out as much money from VISION as he can. This will be done, of course, at the expense of VISION’s distributors and customers.