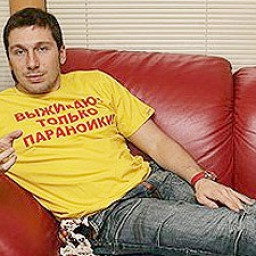 Born September 10, 1974, in Moscow. His father was a pilot, and his mother - an engineer-economist in the Ministry of Foreign Trade and the Ministry of Foreign Economic Relations. In 1991, Chichvarkin entered the State University of Management on specialty "Managerial Economics in automotive transport". Along with his studies at the university he was engaged in trading; he had several trading outlets in the "Luzhniki" market. In 1996, Chichvarkin graduated from the university and entered the postgraduate school, where he studied two years.

And in 1997 together with his friend Timur Artemyev he created the company "Euroset".

In 2001, Chichvarkin was appointed manager of "Euroset", and in 2002 he was appointed director of the retail chain "Euroset". In 2002, the company became one of three leaders of the Moscow market specializing in retail sales of mobile phones, accessories and contracts of cellular operators.

In 2005, the company bought a chain of shops of mobile communication "Techmarket" and a Voronezh company "Mobile shopping chains of Russia” which allowed it to move into the category of the largest Russian retailers.

In 2008 Chichvarkin was elected chairman of the Moscow branch of the party "Just Cause". He participated in St. Petersburg part of the World relay race of Olympic Torch for Beijing-2008 ".

In January 2009, Yevgeny Chichvarkin was arrested in absentia by the Basmanny Court of Moscow on charges of involvement in kidnapping and extortion.

In March 2009 the General Prosecutor of Russia sent an order to Interpol declaring Chichvarkin in the international search.

According to press reports, in 2004 a suspicion appeared that the company "Euroset" used schemes to minimize taxes. As reported, that was a conclusion made by the auditors from KPMG. The auditors pointed out that in addition to 35 companies from "Euroset" - in 2004 the company used a number of other companies unrelated to it. KPMG experts did not exclude that taxmen could have had certain questions to the company audited.

Euroset claimed that they had never used any illegal schemes. As representatives of the company explained, KPMG had been contracted to bring management reporting into line with international standards. Auditors were never asked to express their opinion on the documentation reliability. Therefore, "Euroset" provided KPMG with partial information only according to which the conclusions were made.

Two weeks after the scandal Euroset announced that in October it was going to import handsets, and to refuse the help of mediators.

The Federal Tax Service said to "Vedomosti" that they were not going to check the "Euroset" on the basis of one auditor's report.
Source: "Bulletin" from 11.11.2005

In 2005, the Federal Tax Service filed claims against "Euroset" on the reason it had hired employees through a recruiting agency "Commerce and Management", "Personal decision", and "AE" Management". Those firms provided "Euroset" with employees in leasing. The tax office decided that "Euroset" had used such a scheme of recruitment in order to evade taxes. Inspections on the subject had been conducted from July to August 2007.
Source: Novaya Gazeta # 66 from 8.09. 2008

According to the press,on December 27, 2007 one of the structures of "Euroset"- the company "Euroset-Ekaterinburg" filed a lawsuit against the Federal Tax Service Inspectorate. Subsidiary of "Euroset" challenged claims of the tax specialists on employees' hiring method. On May 5, 2008 Arbitration Court of the Sverdlovsk region confirmed the tax specialists' claim against "Euroset" and estimated it at 118 million rubles.
Source: www.newsru.com of 3.09. 2008

As the press reported, on March 2006 Sheremetyevo customs officers of department "K" MIA of Russia with the approval of the Moscow regional prosecutor's office arrested more than 160 thousand handsets of "Motorola" valued at 530 million rubles. The handsets were intended for sale in the shops of “Euroset". Referring to official data from the department "K" the press reported that those arrested phones were counterfeit.

An international scandal combursted. Evgeny Chichvarkin claimed that the arrested party had been originally producted by "Motorola". And what was most shocking fact for the international community, "Motorola" confirmed it. Some time later the law enforcement authorities returned most of the seized handsets to the businessman. Investigation of the criminal case firstly brought them to a conclusion that handsets were not counterfeit, but smuggled. Then the arrested handsets were simply considered to be "harmful", and it wasn't confirmed again. As a result, the case was stopped for lack of evidence. This happened after Putin intervened the situation personally under the influence of foreign diplomats.

The press supposed that Euroset deprived some structures close to the public authorities of informal proceeds of gray imports by contacting the suppliers of handsets directly. The reaction was the story of handsets detention in Sheremtyevo.
Source: "Your secret adviser" # 2 (330) on 19.01.2009

In May 2006 the media reported that Russian company RussGPS accused "Euroset" and Motorola of violating patent rights in the field of mobile communication terminals. Representatives of RussGPS claimed that the American telecommunications giant violated patent laws by producing and supplying vehicles to Russia using borrowed technology. According to representatives of RussGPS, "Euroset" violated the law by selling those handsets in its stores. They reportedly talked about models S115, C261, S333, S390, E365, L6 and L7.

In connection with this scandal the press carried out an analogy with another story - the recent arrests of Motorola handsets in Sheremetyevo. It was suggested that both of the events — a part of the war waged against "Euroset" and Motorola.
Source: www.cnews.ru on 23.05.06

It was reported that RussGPS filed a lawsuit against Motorola, which filed a counterclaim and demanded to compensate its loss of goodwill amounting to $ 18 million. As the press wrote, RussGPS won.
Source: "Profile" # 39 (642) on 26.10.2009

According to media reports, in March 2007 Chichvarkin was mentioned in connection with criminal charges against the director of "Iled M"LLC Dmitry Sidorov. The company headed by Sidorov supplied the Euroset with mobile phones and accessories in the period of 2004-2005. The Head of "Iled M" was suspected of tax evasion on an especially large scale.
Source: "Komsomolskaya Pravda" 01.10.2008

It was reported that "Iled M" supplied "Euroset" with handsets for 7.2 billion rubles. The transactions were made when co-founder of "Iled M" was the chairman of the board of directors of the holding "Euroset" Evgeny Chichvarkin.

The criminal case was initiated after the audit of the Company "Iled M" conducted by the General Directorate of the Ministry of Internal Affairs in the Central Federal District (GU MVD CFD). It turned out that "Iled M" bought phones from four companies: JSC"Megapolis", " Alliance Service" LLC, "Tehnokor" LLC, and "Torginvest"LLC registered on the people who had lost their passports. The law enforcement agencies believed that "Iled M" intended to get a tax deduction of more than 1.1 billion rubles, or save that amount on the payment of VAT. According to press reports, Sidorov explained to GU MVD CFD staff that he had not delved into the economic activities of enterprises, but only signed documents they brought to him.
Source: "Kommersant", 05.03.2007

The materials of the criminal case against Dmitry Sidorov were taken by SKP RF and attached to the others on the smuggling of mobile phones in Russia.
Source: Rosbalt-Moscow from 10.09.2008

According to press reports, in September 2008 the central office of Euroset was searched. As stated in the law enforcement agencies, they had nothing in common with those related to the case of smuggling of cell phones, arrested in the Sheremetyevo customs office. The press hinted that the new raids could have been linked with the intention to buy a part of "Euroset" for a mobile operator MTS. "Euroset" denied such a version and claimed that it was a revenge of those who suffered during the arrest of Motorola handsets at Sheremetyevo.
Source: www.newsru.com of 3.09. 2008

Also in September 2008, as the press wrote, two executives of “Euroset" were arrested - Vice-president Boris Levin and the deputy security chief Andrei Yermilov – upon the approval of the Basmanny Court of Moscow. They were suspected of usurpation and kidnapping of a forwarder of “Euroset" Andrew Vlaskin in 2003. The latter had a conflict with the management of the company: he was accused of stealing a large batch of mobile phones worth almost 20 million rubles according to the rates of 2003. a criminal case was instituted against Vlaskin. However, the forwarder reimbursed the damages cost to “Euroset", and the criminal prosecution was discontinued. But five years later, on September 1, 2008 Vlaskin wrote a statement to the police, on the basis of which criminal proceedings were instituted; Levin and Ermilov became involved.
Source: "Your Privy Councillor" # 2 (330) on 19.01.2009

The media considered the transaction price cheap. They linked it not only with the "crisis" discount, but with the situation that Eugene Chichvarkin happened to get to: because of the problems with law enforcement authorities he was not in a position to bargain. In October 2008 the structures of Mamut sold 49.9 percent of "Euroset" to "Vimpelcom".
Source: "Rossiyskaya Gazeta", # 4756, dated 23 September 2008, the "Company" dated 31/08/2009

In January 2009, Basmanny Court of Moscow City arrested in absentia the owner of "Euroset" - Evgeny Chichvarkin. He was accused of involvement in the abduction and extortion of Andrew Vlaskin. Later businessman's acts were reclassified from organization of a kidnapping to aiding and abetting. The case against Chichvarkin was separated since he had escaped from the investigation. In March 2009 the General Prosecutor of Russia sent an order to Interpol declaring Chichvarkin in the international search.
Source: www.vesti.ru from 30.06. 2009

At the end of February 2010 the media reported on the extension of the investigation on the case of “Euroset" until May 2. Currently there are several defendants in the case - former Chief of Security Service (SB) "Euroset" Boris Levin, and his staff — employees of the security services company Andrey Ermilov, Sergei Katorgin, and Vitaly Tsverkunov, as well as employees of PSC "AB" Euroset "Yuriy Rogov, Alexei Olesik Vladimir Ilyin and Roman Chichkov. The position of the investigation is as follows: In 2003, employees of the security services of "Euroset" and PSC "AB" Euroset " suspectedAndrew Vlaskin of stealing a large consignment of mobile phones; with the knowledge and interest of Chichvarkin they launched searches for the suspect and involved the staff of the MIA Southern District of Moscow. They forced another forwarder of “Euroset" Dmitry Smurgin to write a statement to police on Vlaskin by beating him. After that the district police department opened a a criminal case. against Vlaskin. He was announced in tracing by a well-known former head of MIA "Tsaritsyno" Major Denis Evsyukov. Vlaskin was detained in Tambov and the then Criminal Investigation Department detective Kurt Alexander (who was also going to appear in the court) handed him to the security services of “Euroset". Andrew Vlaskin was brought to a rented apartment, he was beaten and demanded to repay the money.

It is reported that currently Evgeny Chichvarkin is in London. In June 2009, the General Prosecutor's Office began the extradition procedure of Chichvarkin from the UK. Consideration of the issue in the Westminster Court in London has been appointed on August 2, 2010.
Source: Rosbalt Moscow, 28.01.2010, www.finansmag.ru on 27/02/2010

The representative of the Foreign Ministry Andrei Nesterenko told reporters he hoped that a traditional situation was not going to happen in the case of Chichvarkin - when a suspect in a criminal offense (whose extradition had been sought by Russia) was trying to present himself as another victim of political persecution."
Source: Kommersant-Online, 10.09.2009

According to press reports, Chichvarkin pleads not guilty for the alleged crimes: "I hope tol prove to everybody that I was right", he told reporters - "and I hope that British justice is independent, and will be honest with me."
Source: "Kommersant" # 225 (4280) on 02/12/2009