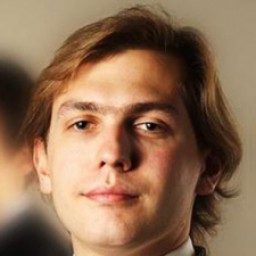 He was born on 1 December 1985 in Moscow. He studied industrial processes engineering at Moscow School of Economics, and then at Stanford University in California.
He started working very early. First he was a project manager in Siberian Internet Company, and then he became engaged in energy trading in London branch of Louis Dreyfus.

Since 2005 - the founder and managing partner of I2BF foundation, direct and venture capital fund of investments in alternative energy.

Even at the university, he helped to create Stanford Relief Fund, the charitable fund for victims of catastrophes and natural disasters. After the tsunami in Southeast Asia, he personally gave the first 120 thousand dollars to help the affected children.

A little while later, he and his father created Golubovitch Foundation in London to help Russian arts students to study in Britain.

The son of the former UKOS top manager and the board chairman of Arbat Capital Alexey Golubovich, Ilya, manages I2BF Venture Fund, which invests in various alternative energy technologies. His father denies the involvement in his son’s investments, assuring that he hasn’t created any venture capital fund. However he does admit that sometimes the hedge funds managed by Arbat Capital invest in the sector buying shares at stock markets.

The father and the son have been working together for a long time: Ilya Golubovich worked in the board of directors of Russian Investors Company, which his father bought from one of Menatep Group structures in 2001 and "gave to his colleagues" in 2006, when Illya was 20 years old. I2BF Venutre Fund was created in 2005 as a branch of his father's Arbat Capital, and only later it became independent.

After graduating from Stanford University in the summer of 2007, Ilya Golubovich met Elena in Italy. She was studying design in London then. The young people got married, and their daughter was born. The family occupied two apartments in Queen's Gate Place of approximately $4 million total cost. The couple lived in one apartment and their daughter Maya and her nanny occupied the other.

In February 2009, Elena filed for divorce, and the juridical proceedings began in London and Moscow. Russian courts sided with Golubovich, British courts set Helen a high alimony. In early 2010, London High Court ordered Golubovich to pay his former wife £300 thousand per year prior to the divorce agreement (or prior to the final court decision), and then, in August, it decided that Helen has the right for the alimony in the amount of £2,8 million plus reimbursement of legal charges.

But Elena accounted a problem: in August 2010, Ilya left the UK. He refused to pay, and to avoid custody and enforcement of the decision, he does not enter the territory of the country.

In Britain, the Golubovichs lived off Ilya’s mother, Olga Mirimskaya. Subsequently, Mirimskaya, chairman of the BKF Bank and head of Russkiy Produkt JSC (Russian Product), filed a lawsuit against her son about the ownership of the apartments trying to exclude them from the case of the divorce.

In particular, in the summer of 2007, Illya received £6 million from Mirimskaya on his account, which enabled him to obtain a British investment visa till September 2011 (£750 thousand had to be invested in British government bonds).

Golubovich said that Elena wanted to get illegal access to the family’s fortune estimated at $200 million.

The judicial documents did not say what exactly personal circumstances had led to the divorce. However, they stated that from the beginning of the divorce (February 2009) till the summer of 2010, Ilya Golubovich visited not only London, but also Moscow for a long time - where he "stayed in an apartment rented by his bride."

The spouses have spent more than £3 million on the divorce proceedings, but they are not going to stop: the annual alimony of £300 thousand seems to be too small to Elena, but to her husband it seems to be too high.

In 2012, Kazakhstan and Russia signed foundation documents of a nanotechnology united fund. Its targeted size was to be not less than $100 million. The very letter of intent of the foundation was signed by the representatives of Rosnano, Kazina Kapital Management, VTB Capital, and 12 BF Global Ventures back in October 2010. The participants signed the foundation documents. After that, the fund was to start somehow functioning. However, it was revealed that this intergovernmental fund began working much earlier: the contenders’ selection for the financing was being held by VTB Capital and 12 BF Global Ventures managing companies for the past 6 months.

“We are negotiating with several Russian and Kazakh institutional investors and development institutions how to join this fund. I am not going to tell you the names, because it can affect the negotiations”, the partner of the new foundation and the founder of 12BF Global Ventures Illya Golubovich said at the press-conference after the signing ceremony, “Besides, we have developed a whole strategy of involving international capital  through the managing offices in Dubai, Singapore, the USA. We are planning to get involved the institutional investors from these regions as well. A marketing campaign of the fund has already been made, and there is a significant interest, particularly, from the Middle-East”.

The journalists tried to find out in what the new structure was going to invest. And they learnt that there was nothing concrete yet.