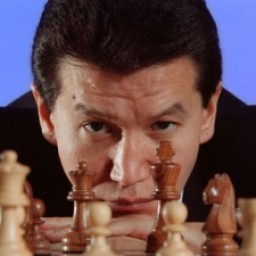 Kirsan Ilyumzhinov (born on 5 April 1962, Elista, the capital of Kalmyk Autonomus SSR) was born in the family of the party worker and the veterinar. In 1979 he finished school no.3 in Elista with honours. After school he worked as a mechanic-fitter at Zvezda plant. For two years he did his compulsary national service to the Soviet Army - in the North Caucasus (he was demobilized holding the rank of senior sergeant).

In 1982-1989 he studied at the Moscow State Institute of Foreign Relations.

In 1988 he was expelled from the university «for drinking alcohol in a public place» (he was reported by fellow students). After he wrote open letters to 19th conference of the the party (he addressed Mikhail Gorbachev himself) and to foreign affairs minister  Edward Shevarnadze, the institute held an investigation and reinstated Ilyumzhinov. He was also reinstated in the party.

In 1992 he founded together with Evgeny Dodolev Novy Vzglyad newspaper

1993 president of the Russian Chamber of Entrepreneurs

11 April 1993 first president of the Republic of Kalmykiya

In 1995 he was reelected the president of Kalmykiya for 7 years in an early elections.

November 1995 president of the FIDE

On 27 October 2002 he won the second round of the presidential elections in Kalmykiya.

On 24 October 2005 president Vladimir Putin appointed him the president of Kalmykiya for another 5 years.

On June 2006 he was reelected the president of the FIDE.

On 6 September 2010 he said he would not lay claim to the 5th term as the president of Kalmykiya.

On 29 September 2010 he was reelected the president of the FIDE.

Order of Merit for the Fatherland of the 4th Class (2011)

Asteroid 5570 Kirsan is named in his honour.

Ilyumzhinov met his wife in school. In 1990 she gave birth to his son David.

Ilyumzhinov was reported to earn his first million of roubles in 1990. The same year he became the president of a San international corporation. He set up Step bank in Kalmykiya. In 1992 Step received 11 billion of roubles as a loan from the Russian government. The money was moved to the accounts of firms, charged with buying wool from the state farms. But wool had never been bought and the majority of funds disappeared.

In 1997 Ilyumzhinov was reported to provide support and arrange favourable conditions to the totalitarian sect of Sun Myung Moon (Unification Church). Their activities are banned or restricted in a number of civilized states.

In June 1998 Larisa Yudina, chief editor of Sovetskaya Kalmykiya Segodniya newspaper, was stabbed to death. The journalist was critical about Ulymzhinov's policy and wrote a number of articles, exposing corruption in the republic. The police accused earlier convicted Sergey Vaskin, advisor to Ilyumzhinov for economic issues. Ilyumzhinov said that Yudina had been linked to business and that her murder had not been politically motivated.

At the hearings in State Duma in 1998 finance minister Mikhail Zadornov told members of the parliament that Ilyiumzhinov de facto emitted 200m roubles which he moved not to the National bank of the republic, but to the clearing bank Kalmykiya.

In December 2007 Rady Burulov, mayor of Elista, was offered to step down. However Burulov did not want to leave his post. On 4 January 2008 Ilyumzhinov said he took the mayor’s function in his hands. The government of the republic was charged with compliance and enforcement of the budget of the city. It meant the policy of direct presidential rule.

On 9 January Burulov gathered members of the city hall and made a number of critical statements against Ilyumzhinov. He suggested that the head of the republic should retire. His words drew a wide public response in Kalmykiya.

Than the federal center interfered. It emerged that in March 2008 the investigative committee within the Kalmykiya’s prosecutor’s office opened a criminal case against Burulov on suspicions of the abuse of power. At the instance of the prosecutors, the court of Elista removed Burulov from the post of mayor.

On 21 April 2010 chairman of the supervisory board of the Russian Chess Federation Arkady Dvorkovich announced Ilyumzhinov’s nomination for the post of the president of the FIDE from Russia. Ilyumzhinov’s rival Anatoly Karpov said that this nomination was illegitimate and accused the FIDE of corruption. In June 2010 Ilyumzhinov filed libel suit against Karpov.

In July 2010 Karpov took the case to international Court of Arbitration for Sport in Lausanne. He wanted Ilyumzhinov’s nomination abrogated. On 27 September the CAS ruled in favour of Ilyumzhinov.

On 29 September 2010 the congress of the general assembly of the FIDE in Khanty-Mansiysk reelected Ilyumzhinov as its president. Ilyumzhinov won the election by 95 votes against 55.

On June 2011 Ilyumzhinov met Muammar Gaddafi in Tripoli. They played a game of chess and decided to hold a chess tournament.