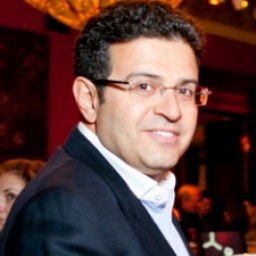 Born in 1969, Strunin is the Chairman of  Mercury, the largest Russian luxury retailer, selling watches and clothes as well as cars. He is also the founder of TSUM Art Foundation. He is a bit vain, though carefully conceals this fact:  his  photograph is kept behind the wall of his office and can be shown only to chosen ones. His greatest pride is his tank with piranhas. He is not stingy at all and easily gives a discount to people whom he finds agreeable. His face expresses ultimate self-sufficiency.

Criminal proceedings against ex-Prosecutor General Yuri Skuratov revealed that he had placed an order for 14 tailored suites made by the Italian company Zegna. The suites were paid for by the firm Mabetex.

Commenting on that, Scuratov explained that in late spring of 1997, the Kremlin's chief property manager Pavel Borodin informed him that the President had ordered to provide officials with formal suits, supposedly from government funds. Borodin took Skuratov to the tailor to be measured, then  he placed an order for 6 suits. In autumn and winter 1997, Skuratov received 14 suites. In January 1998, the Swiss attorney general Carla Del Ponte informed Scuratov about Behgjet Pacolli`s testimony that Mabetex had paid for tailoring. He called Borodin on it, then gave him $10.000, requesting a receipt to prove the payment for suits. In February 1998, Borodin gave him a $6400 payment receipt and some foreign currency cash. After Borodin had left, Skuratov counted the money to realize that he was given back the same $10.000. For his relationship with Borodin was damaged, Skuratov asked his deputy Kolmogorov V.V. to return $6400 to Borodin, according to the receipt.

Borodin testified that he had got the idea about tailored suits because of Skuratov`s limited choice of clothing. He suggested ordering suits from the firm Zegna, Property Management Department`s official partner at that time. Skuratov himself decided how many suites he needed to purchase. He didn`t pay for the suits. Feeling responsible for the expenses incurred by the firm, Borodin asked Bhegjet Pacolli to pay for Skuratov. Skuratov was very worried about the fact that his suits were paid by Mabetex, and he gave Borodin $10.000 pay-in, asking for the receipt. Borodin didn`t accept Skuratov`s money, for he considered Scuratov`s earnings tiny compared to suites` price. On his request, some bank`s transaction receipt was given to him, which later he brought to Skuratov. From talking to Pacolli,  he learned about the sum of approximately $30.000 paid for the suits.

As evidence in support of his words, Borodin brought the Mabetex invoice dated 14 July 1998,  in the name of Skuratov, for tailoring suites, shirts and neckties worth $39675 total.

During their search of Skuratov`s apartment and dacha, the investigators confiscated 14 male suites, made by Ermeneglido Zegna on 19 and 20 May 1998. An expert examination is scheduled to establish the suits` cost.

CEO and founder of Russian Art Leonid Strunin explained that on terms of contract, his company is entitled to represent the Italy firm Ermeneglido Zegna, retail its products and accept private orders. Strunin has identified a suit, confiscated from Skuratov, stating confidently  that it is in fact made by Ermeneglido Zegna. But he could not clear up whether Skuratov`s suits were ordered through the Russian Art shop.

Besides that, Strunin has told about the fact that took place in 1998, when Mabetex made a transfer of about $100.000 to Ermeneglido Zegna, allegedly for tailoring male suites. Strunin was aware of that, because he has the right of disposal on the off-shore company Vetra Holding account, used as intermediary by said transaction.

Mercury has stated that the city government pushes them towards purchasing these commercial spaces on upcoming auction, scheduled on November, 3.

Mercury group has managed to extend  the term of the House of Leningrad Trade (DLT) refurbishment contract to July.  The company received the Saint-Petersburg project as far back as 2005, but has failed to meet the deadline.

Mercury started investing into ‘Expansion  Redesign project’ of the DLT in 2005. The company should have built a mall and a parking lot on the site of the department store by September 2011, but it exceeded the alotted time. On August 23, the Mercury construction director Dmitry Eliseev wrote to the first deputy chairman of Saint-Petersburg commitee for construction Nikolay Krutov, asking him for 10-month extention of the term. In November 2011, committee for the administration of state property hesitated to approve the new deadline, suspecting that the company would sell the DLT to Gasprom as the office space. However, Mercury сategorically denied any possibility of such a deal.