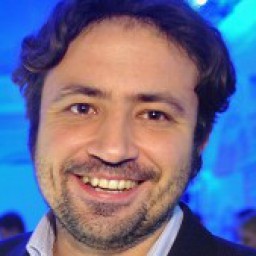 Born February 15, 1977, in Moscow. From 1993 to 1995 he studied at the Bauman Technical University, but did not finish it. In 1999 he graduated from the Moscow International Higher Business School (MIRBIS), MBA Faculty of "marketing".

In 1990 he started business, engaged in trading telephones, calculators, audio players and software.

In 2008 he was appointed a Chief Executive Officer of "KIT Finance".

Since 2010 - President of "Svyaznoy" group of companies; in the same year, Promtorgbank entered the group, converted into Messenger Bank.

In 2010, opened the network of the Pandora jewelry stores.

In November 2012 launched a non-profit project in the field of e-democracy and Yopolis civil initiatives.

1997 - At the age of twenty years, became a dollar millionaire.

2010 - Winner of the competition "Entrepreneur of the Year", conducted by the auditing company Ernst & Young.

2012 - Entered in the world ranking of billionaires (number 1153) by Forbes magazine.

Father - an engineer, his mother - a doctor.

Maxim Nogotkov has small business already in 12 years old. He sold with friends computer programs, installed a Caller ID in phones. "I have no money; parents didn't give because they didn't believe in the success of the enterprise. I borrow from a friend. So my first business experience was made with borrowed money "- told Nogotkov.

In August 2007, the "Megaphone" has threatened the termination of relations with the "Messenger". The charges stemmed from complaints from 11,000 customers, received from subscribers of "Megaphone". In "Megaphone" they were outraged by the fact that sellers are offering buyers to purchase telecommunications services and had no SIM-cards to connect. In "Svyaznoy" had hoped to settle the conflict.

According to Maxim Nogotkov, the Moscow branch of "Megaphone" has brought mobile phone stores less than 1% of revenue, but the scandal threatened the company's business reputation rather than the losses in terms of money.

"Svyaznoy" is not the first time quarreled with partners. In 2006 Nogotkov network was in conflict with a major supplier of mobile phones - LG Company. Koreans accused "Svyaznoy" in the "open price dumping" and on the web claimed that the contract was terminated due to the low profitability of LG brand and poor product quality.

In autumn 2007, CJSC "Svyaznoy", a member of the group companies "Svyaznoy" filed six suits against Tax Inspectorate № 9 Moscow. The company claimed to invalidate the requirements of the inspection of 10 September and 13 November 2007, said the court's website. Founder and president of "Svyaznoy" Maxim Nogotkov and a representative of the Federal Tax Service refused to comment on the subject of lawsuits. The representative of a competing network of cellular shops argued that the inspection checked the payment of "Svyaznoy" of VAT for 2004-2006, and required to pay to the budget of 2.1 billion rubles.

In 2008, JSC "Svyaznoy" filed for bankruptcy, the financial center of the same name network of mobile phone shops. Market participants were confident that the "Messenger" has serious problems with government agencies, or competitors ordered it. The head of "Euroset" Evgeny Chichvarkin found no censorship words at all to comment on the situation.

Declaration of bankruptcy filed in the Arbitration Court of Moscow the CJSC "Svyaznoy". A copy was sent to contractors of the company, including information and analytical agency "Mobile Forum". The reason for bankruptcy of "Svyaznoy" called his payables in the amount of 2,750 billion rubles and tax claims in the amount of 1,223 billion rubles. And, if the debt owed to creditors was roughly balanced by receivables to the "Messenger" (2.546 billion rubles) and its property (28 million rubles), then the company was not able to pay to the tax authorities.

Price wars between major mobile retailer "Euroset" and "Svyaznoy" began in the spring of 2008 and had a negative impact on the market. They dump on the best-selling brands across all networks phones, forcing other players to implement them without margin.

In 2010, there was a scandal: MTS and "VimpelCom" ceased to ship the iPhone to "Svyaznoy". Apple reached an agreement with their counterparts in Russia, including MTS and "VimpelCom", supplying iPhone to "Messenger", on the fact that the iPhone 4 sales in Russia will start on the night of 23 to 24 of September, but the store "Svyaznoy" on Tverskaya the phones appeared two days earlier, on 21 September 22, and Apple decided to punish "Svyaznoy" - asked the MTS and "Vympelcom" not to supply iPhone to the network.

Since February 14, 2011, "Euroset" rented about 300 outlets, operating under the guise of "Svyaznoy"

According to analysts, in late 2010 due to the "Messenger" scheduling error, there occurred an overstock, another round of war continues, it exhausted all its members, especially "Svyaznoy", which had no rear like an operator. According to a source in the "Euroset", 4 months of the war weakened the rival and provoked to launch an attack.

One day before the March 16 Cyprus government closed the banks on the background of discussions on the plans of "haircut" of large deposits, the company Trellas Enterprises withdrawn from the account in the Bank of Cyprus 2 billion rubles ($ 63.85 million). The majority owner of the company turned out to be the founder of the mobile retailer "Svyaznoy" Maxim Nogotkov (№82 in the ranking of 200 richest businessmen of Russia according to Forbes, the state - $ 1.3 billion). Businessman confirmed that Trellas was related to the ownership structure of its assets in the retail sector and the banking sector, but declined to comment on the particular transaction.

Debts of Maxim Nogotkov, founder of "Svyaznoy", are almost equal to his assets, writes Forbes, citing a document that contains proposals of foreign investors to finance business of Nogotkov and disclosed the financial status of the group of companies "Svyaznoy". Cell retailer and Messenger bank cost only $ 100 million, estimates Forbes. And this is without taking into account the additional requirements of the Central Bank, which reduce the cost of business much more. Maxim Nogotkov, concludes the Forbes, sells the business to rescue the unprofitable Messenger Bank.

Net debt of the Cyprus holding company of Nogotkov Trellas Enterprises Limited, as follows from the documents, available to Forbes, is 561 million dollars. Another 471 million dollars owes the retailer. On the Trellas debts is laid more than half of the shares of the retailer and the bank. The largest creditor - is Sberbank, except it Nogotkov called bank "Globex", owned by VEB, and Promsvyazbank and Moscow Credit Bank. According to a source of the publication, loans on the holding company Nogotkov took to finance new businesses. Messenger Bank is also developing on borrowed money. The document states that on its creation the retailer issued home loans on $ 360 million.

Economic problems of another oligarch from retail would not be so interesting, if not his violent political activities. Nogotkov is a darling of the liberal media and liberal public. When the owner of Svyaznoy supported Coordinating Council of opposition, the liberal press squeaked with delight. Launching the project Yopolis, which envisaged the creation of "Internet site for Civil Initiatives", led the liberal press in ecstasy, especially taking into account the fat salaries, which received some opposition journalists in the project. The opposition put Nogotkov in an example; singing praises and all their enthusiasm were as follows: "Here! We are supported by a true businessman, who is not sitting on a pipe: does not pump oil, and has made himself. A real self-made man. He achieved everything by himself and he knows how to build Russia, rather, he knows that we must equip it, but not quilted jackets from Uralvagonzavod. "

Shareholders of Svyaznoy Bank in December 9 will gather for an extraordinary general meeting to consider the liquidation of the credit institution, according to the bank's materials. The report notes that the question of liquidation will be put on the agenda in connection with the advent of appropriate bases according to the law "On banks and banking activity".

Maxim Nogotkov changed the house, Mainland and business vector. Now he lives in a two-roomed flat in Silicon Valley and is preparing an international project in the field of social communications. For information on how to make the turn at breakneck speed, he said in an interview with Forbes Life.

What do you mean by distrust of partners? They did not believe that you will return the money?

M. H .: Several options were suggested, how could I return the money, were offered ways to keep a number of companies, including the Bank, and the most dramatic for me was the fact that these options were not taken.

The company "Financial investments" (affiliated with NPF "Welfare") filed in the Moscow Khamovniki District Court a lawsuit to recover from Nogotkov 2.5 billion rubles repayment of the loan, issued by one of his companies. The lawsuit states that the company "Financial Investments" in 2012 issued a loan of 3 billion rubles to the company Kamestra registered on Cyprus, which, according to the plaintiff's assertion, "was under the de facto control of Nogotkov and was integrated in the "Messenger" group of companies.

As collateral for the loan were issued 15% of the shares of the Dutch offshore Svyaznoy N.V., through which Nogotkov owned a network "Svyaznoy", and 35% of Svyaznoy bank (lost the Central Bank license last November), and Nogotkov gave a personal guarantee for the loan. "For stocks of Svyaznoy N.V. at auction, we have gained 1.5 billion rubles. Considering the ascended interest on the loan, the amount of remaining requirements to Kamestra now stands at 2.5 billion rubles, "- Said the general director of the Company "Trinfiko" (the company that manages funds of NPF "Welfare") Vitaly Balanovich.

Businessman Maxim Nogotkov went to the US, but his Russian lenders are not going to give up. NPF "Welfare" is trying through a Moscow court to return the debt on a loan of 2.5 billion rubles. The loan was issued in 2012 to structures of the "Messenger" under the personal guarantee of Nogotkov.

The company "Financial investments", affiliated with the NPF "Welfare", filed in the Moscow's Khamovniki Court a lawsuit to recover from Maxim Nogotkov 2.5 billion rubles in the repayment of debt under the agreement in 2012. The complaint (a copy is in "Gazety.Ru"), the plaintiff argues that Kamestra company that issued the credit, "was under the de facto control of Nogotkov and was integrated into the group of companies "Svyaznoy", whose owner was the guarantor."

In total the "Financial investments" allocated 3 billion rubles to a businessman. As collateral for the loan were issued 15% of the shares of the Dutch offshore Svyaznoy NV, through which Nogotkov owned "Svyaznoy", and 35% of the shares of Svyaznoy Bank (at the end of November 2015 the Central Bank revoked his license, and in January 2016 the bank by the decision of the Arbitration Court was declared bankrupt).