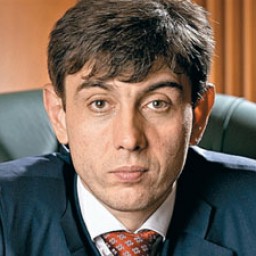 Sergey Galitsky (real name Harutyunyan) was born August 14, 1967 in the village of Lazarevskoye, Krasnodar area. In 1985-1987 he served in the Soviet army. From 1989 he worked in the banking sector. In 1993 he graduated from the Kuban State University, Faculty of Economics and Planning of the national economy.

In 1994, together with partners he founded the company «TransAsia», which distributes cosmetics and fragrances by Avon, Johnson & Johnson, Procter & Gamble. Then Galitsky went out of business and founded the company "Tander", which was to develop food discounters "Magnit".

In 2005 Sergey Galitsky was recognized as the most affluent domestic retailer. To date, the chain "Magnit" brings together more than 3,200 stores and 24 hypermarkets (large part of the South, Central and Volga federal districts). Net consolidated revenues in 2009 - 169 860 000 000 rubles. Sergey Galitsky is the principal shareholder and CEO of the company.

Sergey Galitsky is married and has one daughter.

Sergey Galitsky began his career as a loader. As a student of economic faculty of the Kuban State University, he wrote an article "On the question of financial liquidity," which was published in the journal "Finance and Credit". Shortly after the article had been published, a banker came the university and invited Galitsky to work in the bank. After working in the bank for some time, Sergey Galitsky took a loan in that bank and began buying perfume and cosmetics in bulk and selling it to stores. Later, he expanded the perfumery and cosmetics business and became one of the largest distributors of these products.

Before his marriage Sergey Galitsky had been going under the name Arutyunyan, then he took his wife's surname. The press said that the father of Victoria Galitskaya, the wife of Sergey Galitsky, insisted that his daughter kept her mother's maiden name after the wedding, and his son- in-law should have taken their surname- he did not want his daughter and grandchildren to have the Armenian name.

In 1995, the company TransAsia by Sergey Galitsky received the right to become an exclusive distributor of Procter & Gamble in the Southern region. Subsequently, Galitsky's stores were redeveloped for the food and household chemicals retail in the"discounter" format and united under the name of "Magnit". Soon a conflict developed : the owners of Procter & Gamble demanded from Galitsky to divide the business in order a separate company could distribute products of Procter & Gamble. Galitsky gave "TransAsia" to the partners and turned to his friend, banker Alexey Bogachev, with whom he created the company "Tander" to be specialized in discounters.

Sergey Galitsky does not like to be imposed upon with the rules of the game. The press spoke of several conflicts having occurred between Galitsky and his suppliers. In early 2000, Galitsky wanted to reduce the range of products by Procter & Gamble, but the owners resisted and even sent one of the top managers to Krasnodar. But the dialogue did not work: Galitsky still dropped ten positions by Procter & Gamble from the range and demanded apology from the owners of Procter & Gamble; otherwise, he threatened to go on reducing the range. Thus, the standoff was resolved. A similar situation occurred with Galitsky and the company «Mars»: in 2005 «Mars» proposed conditions that made Galitsky upset. Then he brought all the company's products from the range and began to develop his own brands resembling the brand of Mars.

In 2007, Sergey Galitsky suffered problems with the business. His company "Magnit" suffered losses - profits fell by almost 50%. The cause of the losses appeared to be an increase in administrative costs from the company's main activity in connection with the audit of financial activities for 2006.

In 2008, they wrote that Sergey Galitsky may have lost control over "Magnit". After the additional emission and SPO the share of Galitsky had decreased from 51 to 49.34% shares. At the same time, ZAO "Tander" expressed the view in the press that Sergey Galitsky would retain the control over the company through the Cypriot company Lavreno Limited (Sergey Galitsky was its beneficiary), as it had a share in "Magnit”. According to sources' assumptions, the Cyprus-based company owned about 7% of "Magnito" at the time.

Despite the fact Sergey Galitsky has been speaking against the side projects, which in his opinion, distracts from the core business, he is the owner of an entertainment complex "Kvartal" in Krasnodar, and listed as co-owner of several cafes, companies producing food products, including OOO "Optilayn", which deals with processing and preserving of fish and seafood, as well as advertising agency «Art Side». And since 2008 he has been also the owner of football club "Krasnodar", playing in the second league. He told reporters that he was not a manager in those companies and became one of the founders wishing to assist his friends with money. It is known that in addition to small business projects in the Southern Federal District, Sergey Galitsky has production OOO “Trading House-holding» together with his partner Vladimir Gordeychuk. Galitsky owns 75% shares of the company, Gordeychuk - 10%. The company produces soft drinks, canned food, spices and grains. The products are primarily sold in the shops "Magnit".

In 2007, Sergey Galitsky and his company JSC "Tander" became objects of Antimonopoly services' attention. The Lipetsk FAS of RF revealed the company violation of Paragraph 2 of Article 9 of the Law "On Advertising" by "Tander" and fined it at 40,000 rubles. According to the Antimonopoly Committee, Management of ZAO "Tander" proceeded a stimulating lottery "Race for the prizes! Super-action!", but the advertising had no indication of the source of information, event organizer, place and order the prizes were given, which must be done in accordance with the law. Lawyers of Sergey Galitsky appealed to the Arbitration Court of Krasnodar, but the court refused to allow it and confirmed the validity of decisions and orders by the Directorate of the Federal Antimonopoly Service of the Lipetsk region.

In September 2009 the Federal Antimonopoly Service Committee again considered the case of violation of antitrust legislation by ZAO"Tander", owned by Sergey Galitsky. Wimm-Bill-Dann Foods acted as a defendant. The case was filed on the basis of statements by Asker Gonezhuk (public sources have no information about his identity). The investigators found that May 1, 2008 the General Agreement was signed between ZAO "Tander" and Wimm-Bill-Dann , according to which ZAO "Tander" has to acquire from Wimm-Bill-Dann food products and to maintain a range of yoghurt, dessert products, which ZAO «Tander" acquires from the company Danone Industria. The agreement had 16 retail outlets ZAO "Tander" listed in different cities of Russia, where the products procured under the General Agreement are being sold. According to Asker Gonezhuk, this agreement is inconsistent with paragraph 3 of Part 1 of Article 11 of the Law on Protection of Competition, based on which prohibits agreements between economic entities in the commodity market, if such agreements can lead to the division of volume of sales or purchases of goods or assortment of goods on the territorial principle. FAS examined the case and ruled in favor of ZAO "Tander" and OAO “Wimm-Bill-Dann Foods», justifying this by saying that the Federal Law of 17.07.2009 ? 164-FZ "On Amending the Federal Law" On Protection Competition and some legislative acts of the RF, Article 11 of the Law on Protection of Competition, supplemented by part 1.1, part 1 of article 11 of the Law on Protection of Competition in accordance with which the rules can not be applied to the" vertical "agreements .

The Company by Sergey Galitsky was the first one among the consumer sector companies, which decided to create its own pension fund for employees - Galitsky decided to buy Moscow NPF Christian pension fund "Dobrodetel". This fund was established in 1995, 51% of its share capital belongs to OOO IC "Financial continent», 27% - to AKB "Novator ", 12% - to OOO "Capital-medikl" and 10% - to "Christian Religious Center". In this regard, Director of NPF «Styer» Arkady Nedbay made a statement in the media. He said that by having his own NPF was probably Sergey Galitsky's attempt to retain employees at the workplace and avoid massive layoffs. According to Nedbay, Galitsky will be able to attract no more than 20 thousand people to the fund program that will call into question the pay-back of the fund.

Sergey Galitsky sharply criticized the law «On the bases of state regulation and development of trade activities in Russia ", which came into force on 1 February 2010. In his opinion, Russian lawmakers and officials, including First Deputy Prime Minister Viktor Zubkov, such a document gave an advantage to foreign companies and interferred with the interests of Russian traders. According to Galitsky, the foreign lobby in the law was openly visible, such as the owners of the French retail chain Auchan, German - Metro and other foreign companies.

Sergey Galitsky is a founder of OOO «Invest-Story". In early 2010, at the exhibition MIPIM 2010 in Cannes, the company and the administration of the city of Krasnodar signed an agreement on building in the Kuban capital a residential block area of 620 thousand square kilometers, a football stadium for 22 thousand people and training center for reserve football club "Krasnodar", owned by Sergey Galitsky. Total investment in the project will amount to 14,2 billion rubles within 15 years. Sergey Galitsky said in the press that such projects are not commercial for him, because football is his hobby.