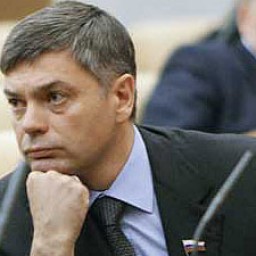 In 1985 he entered the Minsk State Institute of Foreign Languages. From the second year he was drafted into the Armed Forces. He served in the Marines of the Northern Fleet. On the recommendation of the command he entered the Military Red Banner Institute of the Ministry of Defence, the faculty of Western languages; In 1992, he graduated with honors, the specialty of military Interpreter-Consultant in Portuguese and Hungarian languages. Reserve Colonel.

In 1993 he founded and until 1999, headed a group of companies "Delo" - one of the largest holdings on the market of transport services. He has been twice elected to the Board of Directors of Novorossiysk Commercial Sea Port.

In 1999, he was elected to the State Duma of the Federal Assembly of the III convocation. He also served as deputy chairman of the State Duma Committee on International Affairs.

In 2003, he graduated from the Academy of State Service under the RF President in the specialty - State and Municipal Management, Finance, Taxes and Credit. He defended his thesis on "The police system of France." Ph.D in Legal Sciences.

In 2003, he was elected to the State Duma of the RF of the IV convocation. He also served as deputy chairman of the State Duma Committee on Energy, Transport and Communications.

2 December 2007 - he was elected to the State Duma of Russia of the V convocation. A member of the faction "United Russia". Chairman of the Committee on Transport.

Since October 2008 he was appointed head of the delegation of the Federal Assembly of Russian Federation in the Parliamentary Assembly of Black Sea Economic Cooperation.

Awarded the Order of Merit »II degree and other departmental awards.

According to the press reports, Shishkarev's father - the chief manager of the Novorossiysk port Nikolay Shishkarev helped him to settle his business. Shishkarev father and son opened OOO “Delo”, after that Sergey Shishkarev managed to create a large-scale storage export terminal in Novorossiysk workin on" black "and" gray "schemes of clearance. The future deputy managed to earn good money, he became of the richest people in the region.

As reported, in the second half of the 90's the whole port was under the control of “Delo”. It was reported that the calculations and cash flows of the private "terminal" of the Shishkarevs had been passing through offshore fly-by-night companies. It was difficult to track the size of harm inflicted to law enforcement organs. Though they did not seem to be very interested in that. According to press, thanks to the intercession of the local authorities, the investigation of the company "Delo" initiated in 1998 by the Prime Minister of Russia Yevgeny Primakov, was abandoned. They wrote that shortly after, head of the linear District Department of Internal Affairs of the port, police colonel Fedoryakin was found dead in his car, he had engineered a police special operation to clear the port of criminal groups.

According to the media reports, Shishkarev Sr. also helped Shishkarev Jr. to establish a company Seetrass, through which the "gray" and "black" schemes of shipment.

As reported, currently, "Delo" by the Shishkarev father and son works under a different guise. According to the press reports, a few years ago, the Russian General Bank, which reign included Sergey Shishkarev, Duma deputy Alexander Skorobogatko, entrepreneur Gregory Kovalenko and banker Alexander Ponomarenko, bought shares of the port, and actually overtook the management of the NCSP. It was reported that the RSL was merged with the more stable Investsberbank, thus it was slightly harmed during the economic crisis.

As reported, Shishkarev started good connections in Cyprus, where many entrepreneurs with ambiguous terms of the law reputation had settled. And the success of "Delo"on the international market was due to the support of overseas billionaire Mark Rich, who had been prosecuted by the FBI for financial fraud. according to media Shishkarev paid to American with some "pieces of advice" of unspecified nature.

The press noted the political flexibility of Sergey Shishkarev. When going into politics, he began to build bridges with the structures of the all-Russian movement "Honor and Motherland" by General Alexander Lebed; in 1998 he took part in the creation of movement "Fatherland", and then became a sponsor of the People's Party and a faction “Rodina” by Dmitry Rogozin.

As the press wrote, Shishkarev was not just a colleague, but a true friend of Rogozin's family. The party leader even offered to be a godfather to two sons of Shishkarev. According to the media, it was Rogozin who opened the door into government offices for Shishkarev. Shishkarev was nominated by the "Rodina" and enlisted the support of the presidential administration, then he became a State Duma deputy from the Tuapse district. He met the curator of the Russian party system - Vladislav Surkov with the help of Rogozin, and became a sponsor of his new project, the All-Russian youth movement “Nashi”. In exchange Shishkarev gained access to the Kremlin and, under the pretext of supporting Nashists, he was unable to communicate with Surkov without the mediation of Rogozin.

According to media reports, at the first signs of Rogozin's disgrace, Shishkarev left him. Shishkarev said that he broke with the party leader because of a protest hunger strike organized by him, as well as the Nationalist Party roller during the election campaign in the Moscow City Duma. as reported by the political council of the party, Rogozin called Shishkarev a traitor.

Shishkarev flopped over to the "United Russia" in February 2006 and enrolled in the football team "The Parliament of Russia” led by Boris Gryzlov.

At once Shishkarev was reported to criticize publicly the leadership of United Russia, expressing dissatisfaction with the "dominance of the St. Petersburg" and "revenge of intelligence," and declared that the future belongs to "youngsters, rather than to second-class KGB men”. Today, according to media, Shishkarev argues that he continues to be a real scout and faithful to oath at heart .

In order to demonstrate his relevance, as the press writes, Shishkarev created a foundation "The State Club”, which funds not only the movement" Nashi ", but a lot of other organizations loyal to the Kremlin. Among them: "New people", "All-Russian Union of Supporters”, the regional office of All-Russian public organization"Young Guard of United Russia” in the Republic of Ingushetia, a non-profit partnership "Center for protection and assistance to citizens abroad and to support compatriots”, an interregional public organization" Association of Young Leaders "," Russian Congress of Peoples of the Caucasus "and many other organizations with indistinct targets.

However, despite the sponsorship activities, he never got a foot in the door with the Kremlin's inhabitants. The significance of "Gosklub" in the political system has been falling down in recent years: not only Shishkarev is ready for big donations to buy personal access to the inhabitants of the Kremlin. Accordingly, the chances of the MP to go to the upper echelons of politics get less, as alleged in the press. According to media, the signs of cooling relations with the authorities are the failed attempts of Shishkarev to become mayor of Novorossiysk and governor of the Krasnodar region.

Shishkarev's name was mentioned in the press in connection with the alleged raider seizure of ZAO "Progress Association". It was reported that in 2002 the Company entered into investment contract for construction of an apartment building in Moscow for the Office of Presidential Affairs. Then, the society changed by the owner. The Company together with the right to build the house passed to the new director - Dmitry Pankov. There an acquantance of Pankov, named Timofey Telyatnik appeared. He was reported to trump with his kinship with a deputy Shishkarev (holding Delo was controlled by Shishkarev, and allegedly it owned firms- co-investors in the construction of the building for the Office of Presidential Affairs). Telyatnik reportedly began to threat with big trouble to the former director general of the ZAO, Nikolay Lifanov, in case he did not give up a mansion in the center of Moscow and the industrial-warehouse complex in the south of the capital. This property was indeed owned by "Association of Progress", but by that time it had been sold.

The Company was removed from the tax account in Moscow and moved to Novorossiysk. The commercial failure of the Company began, at the same time a criminal case was instituted against Lifanov, he was accused of embezzling funds of co-investors aimed at the the construction of the building for the Office of Presidential Affairs. The sold real estate of the Company that had no relation to either bankruptcy or a criminal case; was seized.

According to press, the story of the Association of Progress " was not the first one of the kind, in which Dmitry Pankov figured. Reportedly he participated in

raider attacks on the company Uralinvestenergo in 2004.

And all that happening with the "Association of Progress" could hardly have occurred without the involvement of serious administrative and corrupt resource.

In this regard, the press assumed that the deputy's resource could really be exploited in this story. And perhaps the bankruptcy of the "Progress" was held in demesne of Shishkarev - Novorossiysk not by accident.

According to the CEC in 2006, Shishkarev earned an income in the following structures:

As the press writes, citing data from the CEC, as of 2007 Shishkarev owned two cars Mercedes S500 and a Jeep Landrover, a motorcycle, and a boat. He was the owner of several apartments in the center of Moscow and lived in a house of 560 square meters in the suburbs area. There were also reports that he drove BMW M6 on the streets.

In early 2010, according to media, Shishkarev supervised numerous commercial structures.

As press writes, according to rumors, in mid-2010 Shishkarev prepared for a new career spurt. They say Shishkarev allegedly set bag for high positions in the RZD. And he had real chances: the father of the current wife of the deputy, Alexander Shatov, at one time worked in the AED, ICS USSR, and later headed the AED RZD. According to the press reports, Shishkarev owes his father-in-law his personal relationship with the former head of the Ministry of Railways Nikolay Aksenenko; he allegedly lobbied him in the Duma.

as they say in the press, some supporters of Shishkarev still hope he might be governor of the Krasnodar region. But things do not go well for the MP. He has a tense relationship with the current Governor Tkachev, and Tkachev, according to the press, has pointedly stated many times the need to strengthen the fight against corruption and shady business in the transport sector. According to journalists, such words can be perceived as a threat: sooner or later, law enforcement agencies will become interested in the transportation business of the deputy. And according to the media, either status of a deputy or appointment to the federal level may save him.

As written in the press, Shishkarev - one of 16 members of the presidium of the faction "United Russia". The press cited words of the head of the Centre for the Study of interaction between business and government Lobbying.ru Paul Tolstoy - these are the key people with influence in the Duma. It is their fractious Mondays meeting deciding how the State Duma will vote during the week, but not the Council of the Duma.

According to the press, Shishkarev is an avid hunter.

As written in the press, Shishkarev was one of the sponsors of the bill, allowing motorists to pass motor vehicle inspection not in traffic police offices, but in commercial organizations.