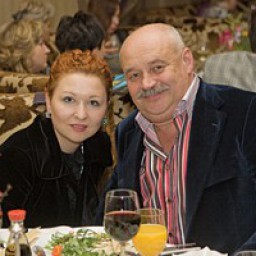 He has a foreign citizenship. Pevzner is often referred as a citizen of Israel and "half-citizen of Russia", although he lives in Vienna.

The biggest scandal, in connection with which the name of Pevsner is mentioned, was the purchase and management at OJSC "Voskresenskie Mineral Fertilizers". Headed by Pevzner and Sergey Melnikov Company "Agroprodmir" gained control of VMF in early 2006, and by the end of the year the company profit fell 67 times, almost to zero. In 2007, profits fell by 22%. During the presence of the group "Agroprodmir" prices for the products of a phosphorus series increased by 4-5 times on the factory, in a nitrogen series - 2.5-3 times. And the cost of gas, electricity and apatite concentrate - about twice.

The company was squeezed to the end, depreciation of equipment reached 100%, and real wages in manufacturing fell by 50-70%. No plan for the reconstruction and the introduction of innovations has not been fulfilled.

Pevzner and his companion on their own discretion spent money, stipulated on the reconstruction of a plant. Thus, the funds to replace the ammonia column Pevsner spent for the purchase of houses in Burgas (Bulgaria). Pevzner and Melnikov promised a former shareholder "Fosagro" an option on 22% of the shares, but due to the increase of fertilizer prices, Pevsner did not have even thought to share the dividends with the new shareholders. First, a package that could move the former owners, has been reduced from 22 to 14% by emission of new shares, and then the package of new co-owners was decommissioned from the depository account so they could not reach them. Ballyhoo, raised by claims, filed in April 2008 by the main shareholder of "Voskresenskie mineral fertilizers" Austrian company Uritrans Dunge-mittelhandelsges to the Moscow Arbitration Court to terminate the contract with the company "Fosagro", which has decided to exercise the right to buy-back package 14%, covers the operation of moving foreign shares.

In May 2008, in one of the blogs of Live Journal was published a letter of Pevsner to accomplice - Sergei Melnikov, which revealed details of the scam with the "crackdown" on "Fosagro" and followed withdrawal of the option (subjected to redemption) of shares of the company under the control of the partnership. Pevzner frankly stated that "they were thrown", people, who "ordered the hype with the plant, have disappeared, phones are silent." Figures, standing behind Pevzner and Melnikov, remained unknown.

In July 2008, the company was included in the holding "Uralkhim" of Dmitry Mazepin, under control of which was passed about 75% of shares of VMF. New owners also do not hurry with the reconstruction and brought the condition in the city-forming enterprise critically close to a social explosion.

What is the ground for the dump of phosphogypsum in the modern sense? This is a complex engineering construction of several dozen hectares, which has a hydro-tight, actually airfield coating, capable of withstanding the pressure of millions of tons of phosphogypsum without deformities and fractures. To ensure that the company has a clear perspective on 25 - 30 years, in the construction of the landfill by 18 - 20 million tons of phosphogypsum need to spend $ 40 - 50 million. Then we can think about the modernization of the plant. But the owners of "Agroprodmir" preferred to output profits from VMF, using offshore trading scheme, through their Austrian firm Uritrans GmBH. The rapid growth of prices on the production of VMF in 2007 - 2008, when the cost of traditional ammonia-phosphorus reached $ 1,200 per ton (currently around $ 300), allowed withdrawing at least $ 350 million - $ 400 million from the company. At the peak of prices, when the company in offshore trading brought $ 20 million profit per month, in May 2008, businessmen sold it to the owner of holding "Uralkhim" Dmitry Mazepin. The group "Agroprodmir" ceased operations in Russia, and Semen Pevzner and Sergey Melnikov left for permanent residence in Austria, where they own a firm Uritrans GmBH.

According to the newspaper The Moscow Post, Mazepin bought VMF from "authoritative" businessmen Sergey Melnikov and Semen Pevsner, now living in Austria. Those sold their properties with giblets - as a "bonus" to the new owner went to the pocket mayor. Since then Yuri Sleptcov was unquestioningly fulfilling what he was dictated by Mazepin's governor and CEO of VMF Murad Chaparov.

Russian season on the Cote d'Azur is in a full swing. Every day private parties are thundering with fireworks. The "Hotel de Paris" shines with the most thoroughbred diamonds and shimmer most fluffy sable. Every third car on the coast is a coarse animal face "Rolls-Royce". Singer Nikolai Baskov grafts as cursed, and soon, it looks like, will gather on the French Riviera all the gold of the world.

... The event is fashionable to curse - they say, there will be only chicks without men there, and it's almost true. Nevertheless, this is a meeting point of Russian-speaking rackety Cote d'Azur. Almost all "nothing to do summer friends", exchanging phone numbers, arranging meetings. At this time major "oligarhoz" of Category A - Mamut, Kerimov, Pugachev and Belotserkovskii - did not get to the ball. A less hyped business celebrities, among which are the businessman Vladimir Marchenko, bankers Alexei Kurochkin and Alexander Plushenko, banker Dan Rappaport, a co-owner of "Renaissance Capital" Sergey Ryabtsev and the ex-owner of the "Voskresenskie mineral fertilizers" Semen Pevsner came, got acquainted and had a great fun.

Despite the fact that Pevsner had long resided in Austria, he continued to be included in Russian rankings. In 2011, "Finance" magazine put him on the 316 line among richest businessmen of Russia with a financial state of $ 300 million.

Group "Fosagro", received by the time from the structures of Semen Pevzner and Sergey Melnikov penalty in the amount of 17.36 million rubles in the case of 14.8% of shares of "Voskresenskie mineral fertilizers" (VMF), do not stop on its laurels and is trying to recover another 1.44 billion rubles as a compensation for losses.

According to the materials of "Fosagro" in March 2011, the group filed a lawsuit in the Commercial Court of Vienna to the Austrian company Uritrans Dungemittelhandelsgesellschaft, as well as to the heads of its, businessmen Sergey Melnikov and Semen Pevzner for damages in the amount of almost 1.44 billion rubles, caused by the failure of Uritrans of its obligations under the contract of purchase and sale of shares of VMF. The lawsuit is pending in the first instance, a regular meeting on the merits of the case will held on 17 January 2013, added to RBC daily in "Fosagro".

Russian consulate in the United States