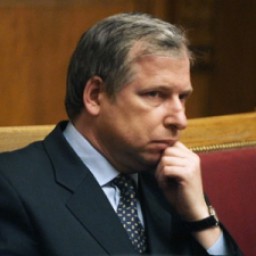 Viktor Cherkesov was born on July 13, 1950 in Leningrad. In 1973 he graduated from Leningrad State University.

Since 1975 he worked in the KGB office in Leningrad and Leningrad region. He began his career as an operations officer in Moscow district department, then as an investigator in the Fifth Directorate which was in charge of political and ideological issues, and later became deputy head of the Directorate.

Since 1992 he was head of the FSB of Russia in St. Petersburg and Leningrad region

Since 1998 he was deputy to Vladimir Putin, head of the Federal Security Service of Russia.

On March 11, 2003 by a presidential decree Cherkesov was appointed Chairman of the Russian Federation State Committee for Control over trafficking of narcotic drugs and psychotropic substances.

In December 2004, after a mob attack on the management of Federal Drug Control Service in Nalchik, Russia, the press hinted that it might have been inspired by his ill-wishers in the security services.

On October 20, 2007 he was appointed Chairman of the National Anti-Drug Committee

In October 2007 he stated publicly (in press) that there was a conflict between Russian security forces.

On May 12, 2008 he appointed head of the Federal Agency for the Procurement of Armaments, Military and Special Equipment, and Logistical Resources (Rosoboronpostavka).

On June 11, 2010 by a decree of the President he wasdismissed

He has military and special ranks

His special status is General of Police (2003)

Cherkesov is in his second marriage. He has two children from his first wife. Second wife, Natalia Chaplina, is CEO of Rosbalt Information Agency, former editor of the St. Petersburg newspaper Chas Pik.

In 1981-1982 Cherkesov investigated the cases against an independent trade union Free interprofessional association of workers (SMOT). In particular, he questioned witnesses in the case against Mark Morozov, investigated the case against a SMOT  member Vyacheslav Dolinin, and against one of the leaders of the People's Labour Union, Rostislav Yevdokimov, who were sentenced to 5 years in a high-security prison.

Cherkesov later claimed that he did not persecute dissidents. Moreover, he argued that the KGB, in principle, never engaged in the persecution of dissents. "There was no persecution for their beliefs, for having a different opinion! It was always some sort of action. Illegal. I think it was especially important that sentences for all those people were imposed not in my office and not at the meeting with the Chief of KGB. It was in court at an open trial. Judges, prosecutors, lawyers, defendants and the audience were present. And the fact that these cases resulted in convictions, to my mind, confirms that actions of operatives and investigators were lawful. "

In 1988 Cherkesov was appointed head of the investigation service of Leningrad KGB. That same year he initiated the last case in the Soviet Union under Article 70 of the RSFSR Criminal Code ("anti-Soviet agitation and propaganda"). At a special press conference Cherkesov called members of Petersburg branch of Democratic Union party, led by human rights activist Valeria Novodvorskaya, anti-Soviet conspiracy and accused them of having ties with Western governments. As evidence, he presented a fax machine as an example of seized spy equipment through which one could, in his opinion, transmit secret information abroad. Subsequently, the case was closed.

In 1992 Cherkesov was appointed head of the Ministry of Security (MB) of St. Petersburg. In response, Petrosoviet session held a vote in the result of which by 117 votes "for" (27 votes - "against" and 15 - abstentions) adopted an appeal to Russian President Boris Yeltsin to cancel the appointment of "a person who participated in political prosecution against members of the democratic movement of the 80s ". However, the appeal was not considered.

In 1996 Cherkesov initiated the case against Navy Captain Aleksandr Nikitin, who was accused of spying. In 1999 Nikitin was acquitted of all charges.

In early 2000, after Putin became acting president, Cherkesov, Sergei Stepashin, the head of the of the Accounts Chamber, and Valentina Matvienko, Deputy Prime Minister, were among possible Kremlin candidates for St. Petersburg governor elections. Eventually, it was Vladimir Yakovlev, acting mayor, who became the governor.

According to media reports, as Plenipotentiary Presidential Representative Cherkesov was not very active publicly, limiting his activities to protocol, meetings and receptions. At the same, the envoy avoided meeting with reporters.  At the end of 2000 Cherkesov receiving for his residence the Palace of Weddings on Petrovskaya embankment in St. Petersburg got huge public response. There were several failed protest actions, including a protest of brides in wedding dresses.

On March 11, 2003 Cherkesov was dismissed as Plenipotentiary Presidential Representative to the Northwest Federal District and was appointed chairman of the Federal Drug Control Service, which in 2004 became Federal Service for Drug Control (FSKN).

When Cherkesov was chairman of FSKN, the agency initiated a number of so-called ketamine cases in which veterinarians were accused of using narcotic substance ketamine as an anesthetic for animals during surgery.

In November 2003 the veterinarian Aleksxander Duka was arrested right in the middle of a surgery. He faced charges of using ketamine. In September 2004, Zamoskvoretsky District Court sentenced the veterinarian to one year of probation. In December of that year, Frunzenskiy court of Vladimir sentenced a veterinarian Olga Tanayeva to three years imprisonment for selling eight vials of ketamine to another female vet. Cases concerning the use of ketamine received wide publicity and were actively discussed in the media. In particular, it was pointed to the fact that the drug police officers, rather than to suppress the activities of criminal gangs, pursue veterinarians.

According to media reports, in September 1995 Cherkesov’s wife,  Natalia Chaplina with permission from St. Petersburg Mayor Anatoly Sobchak, acquired  from the city at book value a six bedroom apartment on Nevsky Prospect. Payment was made in installments during four years with the first payment of six percent of the purchase price.

In March 2007 Chaplina was pre-approved by United Russia Political Council of Pskov, which held a majority in local parliament, as a member of the Council of Federation from Pskov Regional Council. However, later she withdrew in favour of Andrey Turchak, leader of United Russia Molodaya Gvardiya and the son of Anatoly Turchak, a friend of Putin and President of Leninist JSC. Her refusal Chaplina motivated by not wanting “undesirable consequences."

On October 3, 2007 several news agencies reported that FSB operatives and members of the Investigative Committee under the Russian Prosecutor's Office arrested the chief of department of operational support of the Federal Service for Drug Control, Lieutenant General Aleksander Bulbov, two senior operations officer of the same department, Gregory Cherevko and Sergey Donchenko and former Deputy Head of Security Service Federal Drug Control Yuri Gevala. All four were suspected of illegal wiretapping. Media linked the incident to the conflict between security agencies and indicated that all this could damage the reputation of Cherkesov.

On October 9, 2007 the Investigative Committee leveled charges against the three detainees under several articles of the Criminal Code. On the same day media published an article in which Cherkesov admitted conflicts between security agencies that affected Federal Drug Control Service. In the article, Cherkesov actually confirmed that there was a confrontation between the authorities and made it clear that Federal Drug Control Service employees could have been arrested by for this reason. Cherkesov explained going public by the need of preserving stability in the country. In his view, the problem became so serious that it should be discussed, not ignored or turned into a big quarrel.

On May 12, 2008 Dmitry Medvedev dismissed Cherkesov from office as head of Federal Drug Control Service. At the same time Vladimir Putin nominated him as head of the Federal Agency for the Procurement of Armaments, Military and Special Equipment, and Logistical Resources (Rosoboronpostavka).

On June 13, 2010 Medvedev dismissed Cherkesov from office as the head of the Federal Agency for the Procurement of Armaments, Military and Special Equipment, and Logistical Resources.