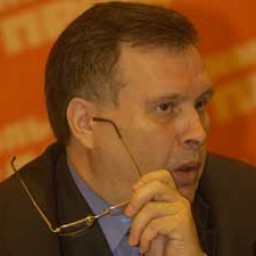 Viktor Ilyukhin was born on 1 March 1949  in  Sosnovka village, ​​the Penza region.
In 1971 he graduated from  Saratov Law School as a legal scholar. For a year he had served in the navy at submarines floating base of the Pacific Fleet
In 1975  he became an investigator of the district Prosecutor's Office, then an investigator at Penza Regional Prosecutor's Office. Then he was a deputy chief of investigative department, the chief of the department, and  the Deputy Prosecutor General of the Penza region.
In 1978 he joined the Communist Party.
In 1984-1986 he served as deputy prosecutor of the Penza region.
In 1986-1989 he worked for Prosecutor's General Office  as  deputy chief of main investigation department.
In August 1989 he was appointed head of Surveillance department for execution of  laws on state security, a member of the board of  Prosecutor's Office and senior assistant of the USSR Prosecutor General.
On 4 November 1991 he instituted proceedings against the USSR President Mikhail Gorbachev under Article 64 of  the RSFSR Criminal Code (treason),  for breach of the oath and the Constitution of the USSR. Two days later he was  dismissed as  Prosecutor General of the USSR.

He worked as a columnist for Pravda newspaper.

In September and October 1993 he took part in confrontation between the parliament and the president of Russia. He was inside the building of the Supreme Soviet of Russia, when presidential troops attacked it. According to other sources, however, Ilyukhin had left the besieged governmental quarters before the assault started.

On 12 December 1993 he was elected to the State Duma of the first convocation as a candidate from the   Penza region.

In December 2003 he was elected to the State Duma for the fourth time. He became a deputy chairman of State Duma Security Committee.

On 10 February 2011 he was made the chief prosecutor at the tribunal  of the All-Russian Officers' Assosiation he headed.  The tribunal held that "during his presidency Vladimir Putin  made a number of actions which can be qualified as treason. "

On 19 March  2011 Viktor Ilyukhin died of extensive  protracted myocardial infarction  in his country house in Kratovo village. He left a widow, a son and a daughter.

Dossier:
For the last two months  former prisoner of  Lefortovo jail Tamara Rokhlina had been restoring her health at the cardiology centre under Burdenko Military Hospital. As it is known, Prosecutor General  instituted  criminal proceedings against her at the suspicion of murdering her husband Lev Rokhlin.  On 30 December 1999 Moscow City Court released her after she had signed a written undertaking not to leave a place. She went to a hospital for a check-up where cancer was suspected. Moreover, this spring health of  her minor son Igor suffering from a irreversible mental illness suddenly deteriorated. On 10 March  Tamara Rokhlina  put him in  children's psychiatric hospital. She desperately needs money  for her son's treatment and rehabilitation. As you know, the "Red Duma" has refused to designate a pension for the son of their late associate.
This aggravates physical and moral condition of Tamara Rokhlina. On the top of everything,  State Duma deputy Viktor Ilyukhin who positions himself as ''loyal successors of  General Rokhlin'' is hiding from her. For two months  he  never attended the widow. And she is  looking forward to asking Ilykhin where the money contributed to  the fund established in  Lev Rokhlin's memory has gone. According to her husband's friends, 32 thousand dollars, that is, approximately one million rubles, were raised. And the widow suspects that Ilyukhin, who on 20 May  1998 together with other members of the Communist Party  voted for Rokhlin's dismissal as chairman of the Defence Committee, had just spent the money on his election campaign.

The other day an incident happened to State Duma deputy and leader of the  movement "in support of the army, defence industry and military science" Viktor Ilyukhin. State Duma Defence Committee  told him that a car under a  federal number registered in his name caused an accident and disappeared from the scene of the crash. Interestingly,  but  Ilyukhin did not recognize neither a car nor a driver. As he told,  federal car numbers are allocated to all members of the Duma without exception. However, he has no personal car,  so he does not use his  number. The car with Ilyukhin's  number  is now wanted for  causing a traffic accident  near Belosrussky train station.

Viktor Ilyukhin brings in two versions.  "Either   traffic policemen,  who knew that I did not long use the number, gave it so someone, or criminals themselves produced a fake number as they heard from someone at the Duma, that I had no car. ", he said.

Member of State Duma Security Committee  Viktor Ilyukhin reached agreement on  financing of his parliamentary election campaign in December 2003 with well-known  vodka tycoon Yury Shefler. Until now, Shefler was known rather as an implacable fighter with the Ministry of Agriculture for the right to  ownership of Stolichnaya  vodka trademark. At the end of May  Viktor Ilyukhin arranged a campaign against Schefler's opponents, having used his personal connections in the Prosecutor's Office to get investigation materials of seven years' prescription.
Source: Kompromat.Ru, 3 July 2003

In 2011   Moscow region committee of inquiry refused to initiate a criminal investigation on  death of  Duma deputy from the Communist Party faction Viktor Ilyukhin, who  died suddenly in March 2011.  In the course of pre-investigation check  investigators found no reason to consider his death to be violent. Investigators reported that, according to  forensic medical experts,   Ilyukhin died  of "acute myocardial infarction."