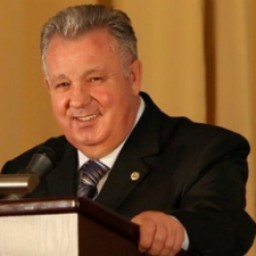 Ishayev is a doctor of economy, and a professor.

1988-1990 director of the Khabarovsk Plant of Aluminum Building Elements

He was a member of the Communist Party of the USSR until August 1991.

While serving as a public officer, he continued his academic career. He prepared his first thesis in 1997. In 1999 he defended his second thesis, and became a professor (2001), an academician (2003), and a full member of the Russian Academy of Sciences (2008).

In 2003, he was elected a member of the State Duma, running on the United Russia party list. He gave up his seat in the parliament, though.

He has been the presidential envoy in the Far Eastern Federal District since 30 April 2009.

He has been a member of the RF Security Council since 2 June 2009.

In 2009, the Control Department for the Far Eastern Federal District of the Ministry of Natural Resources opened an investigation into 26 cases of alleged license fraud.

Amur Closed JSC, a gold producer in the Russian Far East was among the companies allegedly involved in the fraud. Khabarovsk Region governor Viktor Ishayev’s friend and local oligarch Viktor Lopatyuk owned Amur. The company was suspected of having illegally received a number of licenses to dig gold and platinum from Ishayev. The company received licenses exclusively without bidding for it, despite protests of the local prosecutors.

After the investigation, the ministry recalled 6 licenses from Amur. Coincidentally, the officials who carried out the investigation against Amur soon found themselves behind bars. However, after the interference from Moscow, the police opened a criminal case against Lopatyuk, though on charges, not relating to the license fraud. It was reported that the governor gave the prosecutors the green light to spin the case, because he wanted his son, businessman Dmitry, to have the controlling stake in the Lopatyuk’s company.

In 2009, the Court of the Central District of Khabarovsk City issued an arrest warrant against Yury Maslennikov, also known as Yury the Crab. He was suspected of arranging a series of contract killings that grasped the Khabarovsk Region. The police arrested him in Moscow and transferred to Khabarovsk.

The presidential envoy in the Far Eastern Federal Distict, Viktor Ivanovich Ishayev, grew very anxious about the arrest. Crab was a friend of him and a business partner of Ishayev’s son Dmitry. In 2004-2005 Dmitry and Crab coowned the most expensive club in Khabarovsk called Rio. While Crab under the wing of Ishayev Junior, he was inaccessible for the organized crime control department of the local police. Crab kept helping Viktor Ishayev with the matters related to the criminal world and even carried out Ishayev’s assignments.

Thus, Maslennikov the Crab had gathered compromising material about the Ishayevs, which the crime boss used to blackmail the governor. Soon after the arrest, member of the State Duma Boris Reznik, whose campaign Ishayev had sponsored, and TV blow whistler, infamous for accepting money for his services, Andrei Karaulov raised their voices to support Crab.

Viktor Ishayev’s reputation has always been doubtful, due to the alleged connection with the Mafia. It is no secret in Russia, that the whole region of the Far North is the territory where the criminals, especially so-called vory (or “thieves with the code of honour”), which is an influential criminal fraternity in Russia, felt absolutely safe.

When Ishayev was a governor of the Khabarovsk Region, he used to be on good terms with Viktor Kleshch, a mobster and a vor. Through him Ishayev was linked with the regional organized crime group called Obshak. Kleshch helped Ishayev’s son Dmitry. He sent Dmitry in the USA and gave him a job at his woodworking company. Later on, Isahyev Junior befriended Yury Maslennikov (alias Crab). At a trial contract killer Pavel Tikhomirov told court that Dmitry Ishayev had hired him to kill owner of Karat hotel chain Alexandr Bylkov in 2004. Dmitry Ishaev had several run-ins with the law before. His name was mentioned in the criminal chronicle. For instance, Vladivostok’s Frunze District police department opened a criminal case against Dmitry on charges of hooliganism, forgery, and usurpation of power. The police caught him carrying the documents of deputy head of the Khabarovsk Region. Apart from hiring a hit man to kill Alexandr Bylkov, Dmitry Ishayev was suspected of killing of his 18-year-old lover Alexandra Gashilova, who had fallen out of a luxurious 11-storey tall building in Moscow under mysterious circumstances. Dmitry Ishayev lived with her at the same building. At the moment when she jumped out of the window he was at home.

Dmitry runs the financial empire of the Ishayevs. According to SPARTAK data base and EGRYUL unified state register, he was a co-owner of the following companies: Transbunker-Tsentr LLC, Trade House Mezhresurs Close JSC, Trade House Petrovsky Zavod LLC, LyuksEkspoServis LLC, Petrotrade-M LLC. The companies kept winning state contracts in the Khabarovsk Region. There were reports that Ishayev Junior siphoned the assets of the Ishayevs’ clan to the Cyprus.

The Ishayevs control everyone in the Far East: journalists, politicians, businessmen, and criminals. The Ishayevs lobby their interests in the State Duma through the members of the parliament, whom they bribe. They fix all their problems in the region with the help of the vory. They continue with their affairs despite the anti-corruption campaign, which the Kremlin announced. It is clear that the Kremlin will be unable to combat corruption and organized crime in the region if Viktor Ishaev is in the office of the presidential envoy to the Far Eastern Federal District.