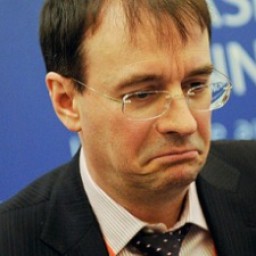 Biography
He was born on August 3, 1962 in Moscow. He graduated from the Moscow State University of Geodesy and Cartography with qualification in engineering, optics, and design; then – the Moscow State University of Technology and Management with qualification in economics, and the Professional Development and Advance Training Faculty of the Military Academy of the General Staff of the Armed Forces of the Russian Federation.
In 1984, he was employed as a research engineer in the NIIP (now the FSUE RISDE - the Federal State Unitary Enterprise Russian Institute of Space Device Engineering).
In 2001, he was appointed to the post of General Director.
From 2006 to 2012, he was the General Designer of the GLONASS system.
A Member of the Presidium of the K.E. Tsiolkovsky Russian Academy of Cosmonautics, a member of the Presidential Council of General and Chief Designers, Leading Scientists and Professionals of High-Tech Industries of the Russian Federation, a member of the Scientific and Technical Council of the Government Military-Industrial Commission of the Russian Federation.
A co-chairman of the Interindustrial Council Microtechnologies in space; the author of more than 100 published scientific papers and 10 inventions and patents. He was awarded the Order of Friendship, second class Medal of the Order of Merit for the Fatherland, the winner of the Russian Federation governmental award in science and technology.
Source: RIA Novosti

Dossier
In 2009, the share of devices compatible with GLONASS did not exceed 1-1.5% in this segment. There are few reasons for the negative attitude to the Global Navigation Satellite System (GLONASS) from potential consumers and manufacturers of equipment and software.
First, chips for GLONASS devices are much more expensive than in the case of GPS. GPS-chips in a small-scale wholesale party cost $ 30, and GLONASS modules - $ 120-150. Secondly, until recently, GLONASS devices were 10 times more voracious than GPS-analogues. Thirdly, participants of the market of navigation and telematics complained of very poor quality of the software for GLONASS. And producers of navigation hardware and software admitted that they were not ready to invest in GLONASS. The investments in creation of the chip - from a zero cycle until the release of the first pilot batch of devices - are € 7-15 million. And there are no guarantees that these investments will be paid off.
Source: Money, December 14, 2009

Despite the solid personnel, the main part of expenses of RKS (in 2007 - 37% to the total volume of expenses, in 2008 - 38%) was the share of third parties services which officially performed the state orders assigning to RKS. A significant part of the state orders, where the RKS was the main executor, were performed by a certain NPO KP Ltd. and Sinertek JSC. Their owners were several companies – the ACC Space TV JSC (79.7% of shares), Kosmokrator RISDE LLC (18.9%), Kumir LLC of the NPO KP – the Scientific Development and Production Association of Space Device Engineering (1.4%). All they were under control of the management of the state corporation. All of the shareholders of the NPO KP were registered at the address of registration of the state-owned company (53, Aviamotornaya Str.,Moscow). And the Sinertek General Director was adviser to the Deputy Director General.
In 2010, the tax authorities found that the companies, performing works under the state orders, had no way to execute them. They did not have even basic logistics and qualified personnel. Moreover, they had no right to engage in military contracts.
The problem was solved simply: despite the fact that more than 1 billion rubles were paid for the performed works during the two years, all the works were being performed by the staff of the RKS. (In 2007, 2333 people were engaged in the works performed by the NPO KP JSC and 75 people – in the works performed by the Sinertek LLC; in 2008 - 1715 and 74 people, respectively.) In 2007, the share of employees of the Federal State Unitary Enterprise (FSUE) involved in implementation of the contracts, signed with the NPO KP JSC, was 76%, with the Sinertek - 96%; in 2008 – 81% and 92%, respectively.
Source: Marker, August 3, 2010

In the summer of 2012, the investigative part of the 4th Directorate of the Russian Interior Ministry (MVD) opened a criminal investigation on unreasonable expenditure of more than 565 million rubles allocated to RKS for creation and development of GLONASS system.
The criminal case No. 118021 was initiated against against “unidentified persons” from among the leaders of the RKS. Searches were conducted in the offices of the three heads of the RKS, including the one of deputy director for economy, in accounting department of the company, as well as in the premises of the five commercial organizations involved in dubious schemes.
Source: Kommersant, July 11, 2012

The head of the Federal Space Agency Vladimir Popovkin has banned the managers and staff of enterprises of Roscosmos, informed about the secret information, to travel abroad on holiday.
Popovkin has also recommended that traveling on holiday outside Russia be limited for managers and employees well-informed on highly important or top-secret information of the organizations. The prohibition applies not only to the organizations and enterprises subordinate to Roscosmos. It is also about the organizations with which the state has a contract to conduct activities related to the transfer of highly important or top-secret information. As a result Urlichich automatically restricted to leave.
Source: Izvestiya.Ru, July 12, 2012

On November 11, 2012, Deputy Prime Minister Dmitry Rogozin issued a decree on dismissal of the head of RKS Yury Urlichich from the office of the General designer of the enterprise and General designer of GLONASS system, having left him on the post of the General Director of the enterprise. That very day the head of the presidential administration Sergey Ivanov said that even in 2010 he was aware of the facts of the inappropriate expenditure of the funds allocated for GLONASS, but he could not announce it as he didn’t want to interfere with the investigation.
Source: Kommersant, November 12, 2012